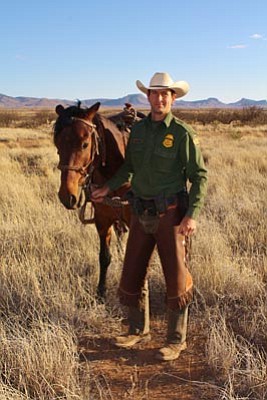 PHOENIX (AP) - The FBI said Friday a preliminary investigation has found friendly fire likely was to blame in the shootings of two border agents along the Arizona-Mexico border, shaking up the probe into an incident that re-ignited the political debate over security on the border.

The shootings Tuesday about five miles north of the border near Bisbee left one agent dead and another wounded.

"While it is important to em-phasize that the FBI's investigation is actively continuing, there are strong preliminary indica-tions that the death of United States Border Patrol Agent Nicholas J. Ivie and the injury to a second agent was the result of an accidental shooting incident involving only the agents,"

Turgal didn't elaborate on the agency's conclusions but said the FBI is using "all necessary investigative, forensic and analytical resources in the course of this investigation."

Ivie was shot and killed after he and two other agents responded to an alarm triggered by a sensor aimed at detecting smugglers and others entering the U.S. illegally.

One of the other agents was shot in the ankle and buttocks, but was released from the hospital after surgery. The third agent was uninjured.

David Klinger, a criminology professor at the University of Missouri at St. Louis and an expert in police shootings, said investigators trying to determine whether friendly fire occurred in a shooting involving law enforcement would compare the ballistics of officers' guns with bullet slugs that were either recovered from or passed through an officer's body.

The officers involved in the case and any known witnesses also would be asked to provide accounts of such a shooting during interviews with investigators. And authorities would try to establish where officers and witnesses were positioned at the time of the shooting, Klinger said.

After a meeting of border governors Friday in Albuquerque, N.M., Arizona Gov. Jan Brewer stood by the criticism she leveled earlier this week in response to the shootings in which she said a political stalemate and the federal government's failures have left the border unsecured and Border Patrol agents in harm's way.

"It's the federal government's responsibility to secure our border, and they need to do that, and then we can deal with all the other issues that have come about because our border hasn't been secured," said Brewer, who plans to attend Ivie's memorial service Monday in Sierra Vista.

The Border Patrol couldn't immediately comment on the frequency of friendly fire shootings at the agency, but such incidents appeared to be extremely rare.

"I know of absolutely none in the past, and my past goes back to 1968," Lundgren said, citing the year he joined the Border Patrol.

McCubbin has served in the Border Patrol since 1985.

Also Friday, Homeland Security Secretary Janet Napolitano traveled to Arizona to express her condolences to Ivie's family and meet with authorities about the inves-tigation.

Turgal said in his statement that the FBI "extends our deepest sympathy and condolences to the family, friends and co-workers of Nicholas Ivie and to our partners in the United States Border Patrol."

Terry's shooting was later linked to that "Fast and Furious" operation, which allowed people suspected of illegally buying guns for others to walk away from gun shops with weapons, rather than be arrested.

Authorities intended to track the guns into Mexico. Two rifles found at the scene of Terry's shooting were bought by a member of the gun-smuggling ring being investigated.

Critics of the operation say any shooting along the border now will raise the specter that those illegal weapons are still being used.

Twenty-six Border Patrol agents have died in the line of duty since 2002.