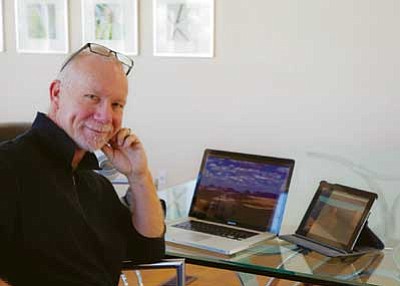 Former Prescott Public Affairs Director Kim Kapin learned recently that the "Live+Work+Play Prescott" video that he produced for the City of Prescott in 2011 is among the nominees for this year's regional Emmys.

Officially called the Rocky Mountain Southwest Chapter of the National Academy of Television Arts and Sciences, the organization announced its nominations earlier this fall, and will make the awards this weekend.

While Kapin wrote, directed and produced the six-minute video, he emphasized that its success also depended on the team that he assembled to help.

For instance, he credits the narration by local resident Tennille (of the popular Captain and Tennille duo) with attracting attention to the video.

"Without Toni's name attached, I'm not sure we would have gotten the recognition," Kapin said. "I felt we needed a recognizable voice."

In addition, Kapin mentioned the contributions of editor Cadu Medina, cinematographer Bruce Dorn, cameramen Forrest Sandefer and Dave Veatch, and Guidance Helicopter - all of whom "were really key to making this piece so popular," he said.

The economic-development and tourism video opens with iconic images of Prescott - clouds moving over Watson Lake, fields of wildflowers framing local mountains, and a snowstorm in the Granite Dells.

It moves onto footage of people enjoying the community's culinary, recreational, and business amenities.

"We wanted to show the unique characteristics of Prescott - that it was a livable place," Kapin said. "We went to so many different entities around town."

The idea for the video formed after Kapin talked with the city's tourism department about the need for a product that would sum up the advantages of living in and visiting Prescott.

"I believe it has played a positive role in the city's economic-development and tourism (efforts)," said Kapin, who recently left his position with the city to take on a job with local radio stations KPPV/KQNA.

A resident of Prescott since the mid-2000s, Kapin said the video reflects his feeling about his adopted hometown.

"I have a passion for Prescott," he said.

"I love living here, I love working, and I love playing here."

Kapin plans to travel to the Emmy awards at the University of Phoenix Stadium in Phoenix on Saturday.