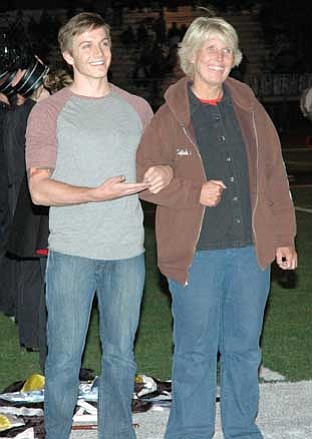 FilePhoto/Cheryl Hartz<br /><br /><!-- 1upcrlf2 -->Bradshaw Mountain High swim coach Patti Eller proudly escorts 2011 Ring of Honor inductee Evan Morris, as he passes along the credit for his performances to her.

Bradshaw Mountain High School will induct its 2012 Ring of Honor members tomorrow, Friday, Oct. 5, 2012, during halftime of the football game between the Bears and the Sandra Day O'Connor Eagles.

Each year, community members present nominations of Bradshaw athletes and/or coaches to a committee to choose the latest honorees. Photos appear above the trophy case in the lobby of the school's main gym.

The inductees for 2012 include:

Larry Prentice - Class of 1990 has the distinction of still holding a Bradshaw Mountain High School record for his time of 51.02 seconds in the 400M dash, and as a member of the 4 x 400 relay team. Larry participated in football and track. As a football player he played both sides of the line as a running back and a defensive back. His leadership and strong work ethic earned him a spot on the 1990 All-Star Team, was first team All-Conference, and was voted MVP for the 1989-90 season. Not only was Larry an outstanding football player but he also excelled on the track and sprinted his way to school records in the 100 and 200 meter dashes. He also ran the 110 high hurdles and placed 2nd in the state track meet in 1990. Larry was named as an All-State track athlete in 1990, 2nd team All-Conference for the 100 and 200 meter dashes, received the scholar athlete award and the Marine Distinguished Athlete Award. After graduating from Bradshaw, Larry attended NAU and graduated with a Bachelor of Science in Geography with a minor in Geographic Information Systems. He is employed with the Town of Prescott Valley as a GIS Division Manager.

Brittany Sharpe - Class of 2004, swam her way to success as an athlete at Bradshaw Mountain High School under the coaching of Patti Eller. Her talents were many as she was an all-around swimmer for her team. Brittany qualified for the state swim meet her sophomore, junior and senior years, placing in state in the 500 her senior and junior years. Her dedication and talents led her to winning region championship titles in the 200 and 500 yard freestyle. Brittany was a strong leader for Bradshaw being named as team captain her junior and senior years and was voted MVP her junior and senior years as well. Not only did she excel in the pool, but was also a success in the classroom, being named as an Academic All American in the 2003-04 season. Brittany attended Biola University on a swim scholarship where she qualified for nationals all four seasons for the NAIA Division in the 200, 500 and 1650 freestyle and placed in the top 16. Her freshman year she swam her way to the Malibu Wave Invitational in 2004 and was the recipient of the NAIA Champion of Character award in 2008. She was also named co-captain of her college swim team for the 2007-08 swim season. After her graduation from Biola University she was an Assistant Swim Coach from 2008-2010. Brittany was them named Interim Head Men's and Women's Swim Coach at Biola University and took 15 members of the team to the NAIA National Championships, where her athletes had 20 Biola record-breaking swims, setting 12 new records for Biola. In addition she had one national champion/All-American swimmer in the 400 IM with the women's team placing 8th overall and men placing 11th overall at the NAIA National Championships.

Sharon Haese - Class of 1984, was a four year letter winner for the Bradshaw Mountain volleyball, basketball and softball teams. Her strong work ethic and dedication to her sports led to being named to the First Team All Region in volleyball, basketball and softball for the 1983-84 season. She also earned All-State honors and was named to the first team for basketball her senior year. Although Sharon was a stand-out three-sport athlete, she excelled in softball, being named the B West Player of the Year her senior year. After graduating from Bradshaw, Sharon played on a basketball scholarship for Yavapai College her freshman year. For the remainder of her college career, she returned to softball, playing at Eastern Ariz. College where she played shortstop on the #1 nationally ranked JUCO and Conference Champions. She finished her softball career playing for Arizona State University. Sharon graduated with a degree in Physical Education and Criminal Justice. She has been employed with Bradshaw Mountain High School as a Physical Education Teacher since 1996. Having a great love for the sport of softball and working with students, she has been involved with the BMHS softball program as a head coach for three years from 1996-1998, winning state championships in 1997 and 1998. Sharon was named 1A-3A Arizona Republic Coach of the year, coached the 1A-3A North-South All-Star Game, was named 3A West Region Coach of the Year and 3A State Coach of the Year in 1996. She has been a volunteer assistant varsity coach since 2006.

Kelsey Greathouse - Class of 2007, competed in cross country and track for the Bradshaw Mountain Bears and earned four letters in both sports. Kelsey had a phenomenal career as a runner at Bradshaw. Her freshman year, she placed 23rd at the 4A state meet. As a sophomore, her strength and perseverance enabled her to run to a 4A State Championship in Cross Country and a 4A State Championship in track in the 3200 meter. She was a key member of the 2006 Regional Champion Cross Country team for BMHS. Kelsey was named as an Arizona All-American her senior year as well as placing at the 4AII State Cross Country Meet. In addition to competing for BMHS, Kelsey ran in the Foot Locker Championships which includes all of the Western States in the U.S. and placed in the top 100 athletes. In the Border Wars which pitted Arizona against Nevada, Kelsey placed in the top 15.

Marianne Bean - Class of 2007, was a force for the Lady Bears' basketball team. As a guard on the team, Marianne accumulated many accolades while competing for Bradshaw Mountain and being a four-year letter winner. Her sophomore year she was named Gatorade Player of the Year, was named to the Honorable Mention Wells Fargo All-Region Team and was Team MVP for the Bears. Her junior year she was selected First Team All-Region, named to the KYCA All-Area Basketball Team, was a member of the Prescott Courier All-Area Team, was selected as Offensive MVP for the Lady Bears team and was named to the Arizona Republic Honorable Mention All-State Team. With her strong work ethic and leadership, Marianne's senior year presented her with many awards. She was the River Valley Tournament MVP, the BMHS Classic Tournament MVP, was named the Tri City/All-Area Player of the Year, was offensive player of the year, was named to the Wells Fargo First Team All-Region Team, shot her way to passing the 1,000 career point total with a game high of 43 points, which still stands as a school record. Not only was Marianne a talented athlete, but she excelled in the classroom as well receiving the Arizona Republic High Achiever Award in addition to be named Scholar Athlete of the Year. Marianne was also a leader off the court as she was Student Body President and was a member of the National Honor Society and participated in various clubs on campus. After graduation, she attended the University of AZ and was awarded the U of A McCord Scholar, top 5 business scholars; the Flinn Scholar, top 10 in the State of AZ; "Top 10" Eller College of Business Scholar; and was one of 25 students chosen to the McGuire Entrepreneurship Program. Marianne graduated Summa Cum Laude with Honors and a 4.0 G.P.A.