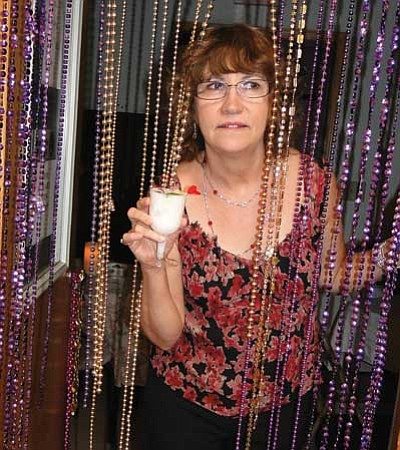 Phyllis Hickey brings a drink from the “speakeasy.” The annual event raised money for Meals on Wheels.

With a theme of The Roaring Twenties, period fashions adorned the people as well as the walls of the Mayer Elders Center Saturday during Casino Night.

Those who wanted a specialty drink merely walked through the beaded doorway into the "speakeasy" for a virgin frozen pina colada or daiquiri. Waitress service was available if patrons didn't want to leave their seats at the Meals on Wheels benefit.

For those who brought their appetites, five different types of pizza along with a fruit, vegetable and cheese plate were available.

The "Casino" contained plenty of tables for Texas Hold 'Em, Poker, and Black Jack, along with the volunteer dealers to man them. Cheers and groans throughout the evening gave clues as to whose luck was running, and whose had run out. Raffles took place about every half hour, and Anne Canady and Pat Williamson entertained with a special Charleston.

Jean Chester won a Prescott Resort package. Karon Travillion and Norm Smith each won an Avon Products Basket. Conni Pollard won a bread machine, but said she had one so she chose again.

This time Joyce Brown was the big winner. Norm Smith won an intricate luggage piece that turned into a backpack. Calvin Elkins won a second resort package, Christmas dishes went to Joan Mullaj, and the grand prize of a framed picture and puck signed by Shane Doan of the Phoenix Coyotes went to Betty Burkhalter.

Chris Shackelford manned the prize desk and stayed busy as people cashed in their winning chips.

There were no losers at this event as all of the profits go to Meals on Wheels. Mayer Elders Club thanks the many volunteers who made this event possible and the community members who supported and enjoyed the event.