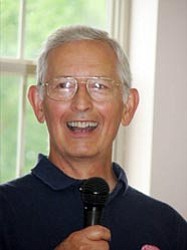 He was a 1958 graduate of Albert Lea High School, and served in the U.S. Army from 1964 to 1965. On May 27, 1967, he married Sandra Olson. He attended the University of Minnesota for a short time before earning his AA degree from Anoka Community College. Henry and Sandra moved to Red Wing in 1974, where he worked for the city of Red Wing as the Public Service Director for many years until his retirement in 1999. In 2008, they moved to Prescott, Ariz., where Henry kept himself busy and social in the same friendly manner he had become known for in Red Wing. Henry was a member of Thrivent and the Minnesota Park Supervisor Association.

Henry greatly enjoyed photography, traveling, hiking, camping, gardening and spending time with his family. Henry was always willing to help a friend or stranger and was able to strike up a conversation with anyone. Henry loved the outdoors, shown by his many visits to national parks, including a 5-day backpacking trip in the California Sierra Mountains with his 12-year-old grandson and his Boy Scout troop this past July. Henry's family recalls how important the city parks in Red Wing were to him. He helped design the water park at Colvill Park and was involved in the planning, design, and development of the Red Wing Flower Baskets, an accomplishment he was very proud of.

He is survived by his wife Sandra; children, Jon (Jennifer) Sorensen of McHenry, Ill. and Jennifer (Kevin) McAdam of Mission Viejo, Calif.; five grandchildren, Natalie Sorensen, Brianna Sorensen, Michael, Colin, and Faith McAdam; one brother, Donald (Eleanor) Sorensen of Albert Lea, Minn.; his sister, Pauline (James) Bale of Richland, Wash.; and many nieces and nephews. He was preceded in death by his parents.

Funeral will be 11 a.m. Tuesday, Oct. 2, 2012, at United Lutheran Church in Red Wing with Reverend Steve Timm officiating. Burial will be at Graceland Cemetery in Albert Lea at a later date. Visitation was Oct. 1, 2012, at Mahn Family Funeral Home, Bodelson-Mahn Chapel, and also for one hour prior to the service on Tuesday at the church. Memorials are preferred to the Kiwanis flower basket fund.

Online condolences may be sent to family at www.mahnfamilyfuneralhome.com.