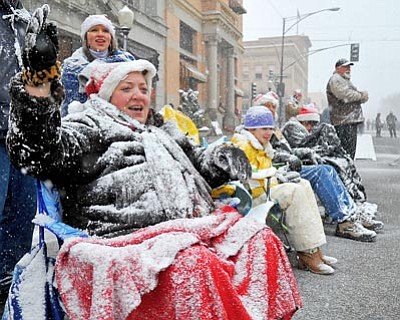 PRESCOTT - Saturday's Christmas parade and courthouse lighting ceremony might not feature the classic snow like last year, but those in attendance probably won't complain that it will be mostly sunny and about 20 degrees warmer.

Last year's parade was notable for its snow and freezing temperatures, which scared a good portion of people and parade entries away. Then, temperatures dropped below 20 degrees for the courthouse lighting at dark. This year the forecast calls for mostly sunny skies, a high of 61 degrees and a low of 36.

"It's always nice to have a little snow, but it's nice to avoid the cold," Prescott Chamber of Commerce CEO David Maurer said.

The 30th annual parade starts at 1 p.m. in downtown Prescott. The theme is "Christmas Joy and Peace." It will feature 95 entries, Maurer said.

The parade grand marshal is Arizona Secretary of State Ken Bennett, who grew up in Prescott and will emcee the courthouse lighting ceremony this Saturday for the 20th year in a row. Bennett also has served on the Prescott City Council and Arizona Senate as its president.

Two hours of musical group performances will precede the 58th annual courthouse lighting ceremony, which begins at 6 p.m. on the north steps of the Yavapai County Courthouse in downtown Prescott.

The lighting ceremony features music and Bennett reading from the Bible about the birth of Christ.

The ceremony culminates with the lighting of the courthouse and 102 trees across the historic plaza, as well as the unveiling of a Christmas display in the bandstand.

The bandstand display is totally revamped this year, said Kendall Jaspers, executive director of the Prescott Downtown Partnership that joins with the chamber to light up the plaza, downtown businesses and downtown street lamps.

The new display will especially appeal to children, Jaspers said.

The bandstand was built in 1910, just in time for the passage of Arizona's statehood bill in Congress. This is the state's centennial year.

The plaza has one more lighted tree than last year, when the number of lighted trees more than doubled from previous years. All but about 30 of the larger elm trees are lighted on the four-acre site.

Organizers spent their $74,000 budget and more, Jaspers and Maurer said, when adding in the new bandstand display, repairs to courthouse lights, crane and lift rentals, and replacement bulbs for the street light decorations. Yavapai County covers the courthouse and plaza electricity costs.

The City of Prescott contributed $30,000 of its bed tax money, and the rest of the costs are covered by private donations.

The owner of the Jersey Lilly Saloon on Whiskey Row, Tommy Meredith, estimated his establishment will raise as much as $15,000 this season for the courthouse lighting effort.

Directly after the courthouse lighting ceremony, Jersey Lilly's will choose the winning raffle ticket for the Bill Nebeker sculpture of Doc Holliday. People who donated money for the Christmas lights automatically got raffle tickets.

The plaza lights will come on each night through Martin Luther King, Jr. Day.

Meredith was downtown Tuesday for the test run of all the lights.

Desiree Garza of Chino Valley saw the lights come on Tuesday as her family walked out of the Prescott Library a block away, so they came down to the plaza to enjoy the display and take some photos.

"This feels real good, like I'm back in the '50s," her husband Ismael said after their children, 5-year-old Seth and 4-year-old Isai, posed for family photos with the lights.

Jeff Blood and Ron Smith from the Yavapai County Facilities Department were testing the remote control that turns all the lights on at once. Blood will turn on the lights Saturday, and Smith will have a back-up remote in hand. How do they like that job?

"It's great unless they don't come on," Blood joked. "Your heart kind of stops."

They spotted only one glitch Tuesday, a darkened row of lights on top of the courthouse.

Just then a young boy ran up to them and asked, "Do you guys have the remote for the Christmas lights?"

They let him turn off the lights before he ran off to another adventure.