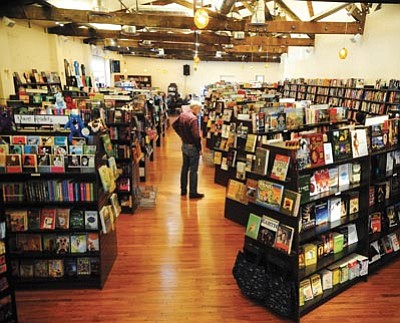 PRESCOTT - The name of downtown Prescott's new bookstore fits nicely with proprietor Ty Fitzmorris' interest in birds, but it also has another significance for the people operating the Peregrine Book Company.

That attitude appeared to fit in with everyone from Fitzmorris to the people who turned out for the store's grand opening.

Fitzmorris acknowledges that he has fielded questions about the future of bookstores often since word got out that he was opening a new store.

"We did lots of research," he said. What he found was that big-box stores with square footage of more than 5,000 have been struggling in the face of increased online book sales. Small bookstores of less than 3,000 square feet also are suffering, Fitzmorris said.

But those in-between, like the Peregrine Book Company, appear to be thriving. "We're in a period of market correction," Fitzmorris said.

After the recent "major disruption" in big-box stores - such as the Barnes and Noble store that closed at Prescott's Gateway Mall late last year - Fitzmorris says books sales now are "entering a period of stability."

He sees his new store as one that can offer a number of advantages to customers that online retailers cannot provide.

For instance, Fitzmorris said many customers still are looking for personalized customer service - a function that he said the 14 employees at Peregrine Book Co. would fill.

And the store will not simply sell books, Fitzmorris said; it also will engage the public in a steady stream of events and book club meetings.

The grand opening featured a number of author workshops and book signings that will be typical of the fare to come.

Event coordinator Susan Lang said the event bookings have been brisk. "People are hungry for a bookstore," she said.

It was through a similar email notice for the Raven Café - Fitzmorris' other Cortez Street business - that Phoenix residents Scott and June Vetter heard about the grand opening of the Peregrine Book Company.

"We get the Raven emails, and we came up just for this," June Vetter said. "I love the atmosphere."

Fitzmorris said the building at 219A North Cortez dates back to 1930, and once served as a railway building for a Prescott streetcar.

"I love, aesthetically, to see the bones of an old building," Fitzmorris said. By retaining the old beams and exposing the ceiling, he said, "You get a sense of upward openness."

Fitzmorris said he used a similar theme at the Raven, the café and bar that is just five doors down, at 142 N. Cortez.

"There will be a lot of synergy between the Raven (and the bookstore)," Fitzmorris said, noting that the café would provide the refreshments for Peregrine events.

Also like the Raven, the Peregrine Book Co. will use green business practices, with locally made products. Fitzmorris also plans to increase the number of used books in the store.

Brodersen said the store currently stocks about 50,000 books, with space for more. The selection will be diversified, he said, with no particular specialty.

"We have best-sellers, new and used books, and publisher's overstocks," said Brodersen, adding that the store also would welcome self-published books by local authors.

After Brodersen's previous Prescott bookstore, Satisfied Mind, went out of business in 2000, he worked in circulation and archives at the Prescott College Library.

For the customers who turned out for the weekend grand opening, the arrival of Peregrine Book Company appeared to come as a relief.

"It's nice to have a place to browse for books," Martin said, noting that she has been feeling a void in the community since Barnes and Nobles' closing.

"When Barnes and Noble was open, I regularly went there," she said. "There's been kind of a big hole."