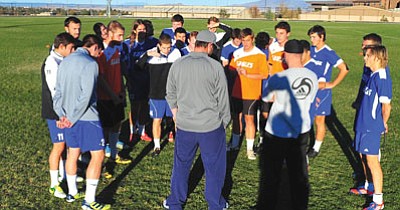 Les Stukenberg/The Daily Courier<br>The Embry-Riddle Aeronautical University men’s soccer team meets for practice Tuesday afternoon as the team prepares to head to Portland, Ore., for the first round of the NAIA Soccer Tournament against Concordia University on Saturday.

The Eagles lost 2-0 at Vanguard Sept. 1, but Embry-Riddle women's coach Todd Poitras said this match should be a different story.

"We're peaking at the right time," he said Tuesday. "We're a completely different team than the team that faced them then. We're excited, and think we might be able to turn a few heads and make a little bit more noise yet before this is all said and done."

Both Eagles programs left the Association of Independent Institutions (AII) this past off-season to join the seven-member Cal-Pac, an NAIA-affiliated conference, and found quick success.

Poitras said the key to the women's team's strong finish this season has been all of its players buying into his system.

Pacing the Eagles women are senior forward and Cal Pac player of the year Kelsey Anderson of Scottsdale, forward and conference freshman of the year Kalyn Goodenough of Gilbert and senior goalie Ciarra Pederson of Puyallup, Wash.

"I thought we were going to have a great season and I thought we had a good, mature group (heading into 2012)," the coach said. "But an accomplishment like winning a conference championship and going to the national tournament is never really something I think you should take for granted."

Embry-Riddle's men are led in part by junior midfielder Jacob Brech and sophomore forward Fabio Pena, each of whom scored a goal in the conference title match.

Eagles coach Matt Barnes was not immediately available to comment about his team Tuesday.

Opening-round winners in the NAIA men's tournament advance to the second round Nov. 26 and 27 at the Emory Folmar YMCA Soccer Complex in Montgomery, Ala.

As for the NAIA women's tourney, opening-round victors move on to the second round Nov. 26 and 27 at the Orange Beach SportsPlex in Orange Beach, Ala.

While Embry-Riddle's soccer teams were rolling on to the NAIA tournament, the Eagles' volleyball squad saw its postseason run come to an end.

ERAU succumbed to Menlo College in straight sets in the Cal Pac Conference Championships Saturday in Atherton, Calif., and finished the 2012 campaign with a 13-15 record.