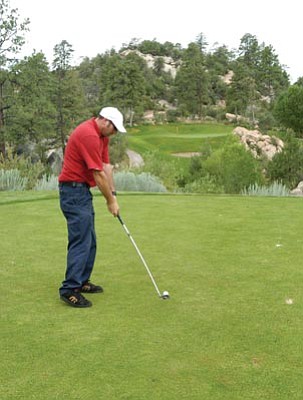 PRESCOTT - The Hassayampa Golf Club closed this past Sunday and is due to reopen this coming spring under new ownership and management.

Ownership of the golf course reverted Nov. 1 from its members to the previous owner after talks to sell the golf course broke down with Arnold Palmer Golf Management, Dan Smith, president of Desert Troon Cos. of Scottsdale, stated in an email to club members.

Desert Troon in turn retained Troon Golf - a totally independent company also based in Scottsdale - to oversee the operation of the club when it reopens next spring. Desert Troon subsidiary HGC Holdings LLC held the lien on the golf course after selling it to the club members in 2008, and has regained ownership of the golf course.

The Hassayampa Golf Club filed for Chapter 11 bankruptcy protection March 30. Larry Stanek, club board president, told the Courier at the time that the club owed money to about 50 creditors ranging from utilities to a mix of suppliers.

Stanek was unavailable for comment this week regarding the change at the golf club.

The new owner and management plan to reopen a "newly revamped and revitalized club" in early spring, Smith stated in the email.

"Desert Troon and Troon Golf are committed to the newly organized Club's success, and longevity, and that planning to achieve both is ongoing," his email stated. "Evidence of this commitment is found in the fact that notwithstanding the change in real property ownership that occurred on November 1st, Desert Troon has offered to allow the members to continue to operate the Club for a short period of time in order to meet certain large event commitments that were made during the past months."

However, Tom Duncan, a Hassayampa Country Club resident and club member for about seven years, said he doubts the golf course will reopen.

"How are you going to open up in spring if you don't have any members?" Duncan asked rhetorically. "You never get accurate information" on membership.

Smith's assistant, Kathy Baumgartner, said she does not know how many members the club had.

"We literally just took this (golf course) over a week ago," she said. "It is going to take us the next 60 to 90 days to assess what's there."

Baumgartner declined to go into specifics, and referred to the email that Smith addressed to "Dear Hassayampa Members."

Two separate letters dated Oct. 24 went to club members from the board of directors and Arnold Palmer Golf Management.

"As you know our common goal has always been to 'keep the Club open and managed by a professional company,'" states the letter from board members Stanek, Steve Sischka and Bob Naglieri. "To date, we have been under contract with Arnold Palmer Golf Club Management to that end. Unfortunately, we have learned that they are walking away from their negotiations from Desert Troon and are terminating both the Purchase and Sale Agreement and the Consulting Agreement."

Arnold Palmer ended its involvement Oct. 26, and transferred employees Joan and Bob Sykora to the Club at Prescott Lakes, a two-page letter from Doug Howe and Ken Story of Arnold Palmer stated.

Howe, whose office is based in the Dallas suburb of Addison, said Desert Troon had the right as a secured creditor to take the golf course because the club did not pay off debt.

The club in March owed about $740,000 to the City of Prescott, Yavapai College and Desert Troon, the Courier previously reported.

The golf course dates to 1919. A group of World War I veterans and city leaders came together to buy 85 acres and open the Hassayampa Country Club with nine holes that became the heart of the first golf and social club in Northern Arizona.

The club closed in 1969 and sat idle for nearly 30 years, when Desert Troon bought the property where the former club sat and surrounding land.