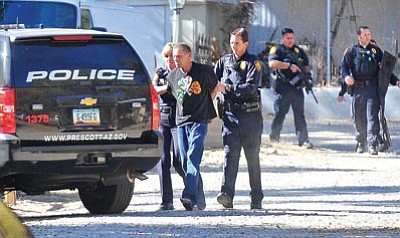 Matt Hinshaw/The Daily Courier<br> Members of the Prescott Police Department escort a suspect who was involved in a stand-off to a waiting police vehicle at the Thunderbird mobile home park on White Spar Road Wednesday afternoon in Prescott.

Prescott police officers arrested a man Wednesday on domestic violence charges after a two-hour standoff at the Thunderbird Park Mobile Homes and Cottages in the 700 block of White Spar Road.

"Around 11 a.m., we saw police cars pull in and we came out here to see what was going on," said Mike Hanna, who works nearby. "They brought out a sharpshooter, and we saw a number of officers head up to the trailers."

Prescott police did not release the man's name, whether the charges were felony or misdemeanor, or what led up to the incident on Wednesday.

A neighbor, who asked that his name not be used, said that the man came over to his place and told him "she took a wrench to me," referring to the woman in the incident, who called the police.

It wasn't the first time that police came to their home, said the manager of the mobile home park, who also asked that his name not be used.

Officers reportedly investigated the possibility of a hostage situation, but no hostages were taken during the incident.

At 12:41 p.m., officers with guns drawn approached another mobile home, and shortly afterward police brought a man in handcuffs from the home.