Thurman re-elected to Board of Supervisors; Smith wins seat in first try 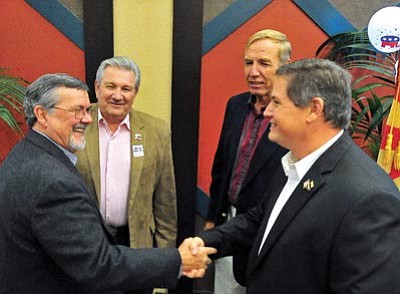 Editor's note: Vote totals are accurate as of 10 p.m. Tuesday.

PRESCOTT - Republicans Tom Thurman and Jack Smith trounced their opponents in Tuesday's general election race for seats on the newly expanded Yavapai County Board of Supervisors.

Smith, a political newcomer, collected 8,573 votes, besting Democrat Bill Williams, also in his first run, who had 3,867, for the District 5 seat.

Three other Republican candidates were unopposed after wins in the primary election: former Prescott Mayor Rowle Simmons in District 1; incumbent Chip Davis in District 3; and another new face, Craig Brown, in District 4. Their names appeared on the ballot but, barring a concerted write-in candidacy, had already won their districts.

The board expanded from three supervisors to five this year after the county's population topped 211,000. Supervisor Carol Springer, currently representing District 1, announced she would be stepping down at the end of this term, which left the race for three seats wide open.

Smith wore a broad smile as he circulated the room at the Yavapai County GOP victory party, held Tuesday night at the Prescott Resort.

Smith said he planned to keep his current job as transportation manager at Ace Hardware while also holding down the supervisor role. "I've already got the meeting dates taken care of," he said, "and I've been pretty much everywhere you can think of during the election cycle (while working at Ace), and I don't plan to taper it down at all."

But, he added, "If I need to stop and back away from Ace Hardware, that's what I'm going to do. My dedication is to the people of Yavapai County."

Thurman said he worked hard to win his district as well. "I started campaigning, really, last November," he said. "I think people heard the truth about what my background is, and the decisions I've made for Yavapai County."

Simmons said his "reputation for building consensus" would be a powerful tool in his new role, which he said would be important in dealing with the elected officials who act as county department heads.

Brown, who has lobbied hard against the Williamson Valley Road expansion project, and saw a partial victory this week as the current board put off funding so the new board could have a vote, said he has already spoken to Smith about a new project to extend Glassford Hill Road to Chino Valley.

"It'll save (drivers) time, it'll save them money, energy," he said, adding that it is a project he could support, unlike the "road to nowhere in Williamson Valley."

Brown, Simmons, Smith, and Thurman took the stage - Davis was not at the event - together to celebrate their wins, shaking hands and pumping fists.

They each gave a brief victory speech, with Smith concluding, "We're going to do some great things for you. We've got your back."