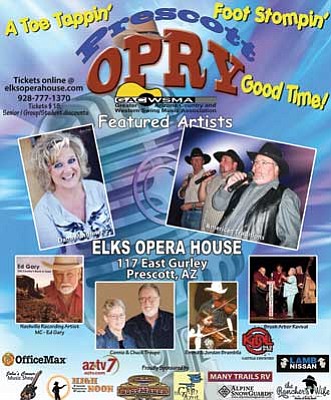 American Traditions, new to the music scene as a vocal ensemble, will headline the Prescott Opry's concert Thursday, Nov. 8, at the Elks Opera House.

Show time is 7 p.m. For tickets, $15 each with group, senior and student discounts, call the opera house box office at 777-1370 from 10 a.m. to 2 p.m. Tuesday through Friday or log onto www.elksoperahouse.com.

Vocalists who make up American Traditions are Matt Hughens, Glenn Dillon and Ken Morehead. Hughens and Dillon have known each other for about 15 years and have performed under the stage name, Matt Dillon. Morehead is a Valley disk jockey and met Hughens through Dillon.

Once the three found themselves in one spot at the same time, they started singing together "and discovered that we had a pretty good sound, so we formed our group now known as American Traditions," Morehead said.

American Traditions will sing several songs from their classic country repertoire during the Elks performance, Morehead said. The audience can count on hearing tunes from such greats as the Statler Brothers, Jim Reeves, George Strait, and Larry Gatlin, particularly Reeves' "Distant Drums," Gatlin's "Houston," Merle Haggard's "Sing Me Back Home," and Alabama's "Lady Down on Love."

Thursday's show will be American Traditions' first appearance in Prescott, and the group is "looking forward to it," Morehead said. They will be backed up by master of ceremonies Ed Gary's Prescott Opry Band.

Hughens, Dillon and Morehead are primarily vocalists when they perform as American Traditions, but Hughens "picks a wonderful guitar," Morehead said. "He has a Chet Atkins finger-picken' style."

"Each of us has a profound enjoyment for the music and attempting to promote our harmony sound," Hughens said, adding he also belongs to a group called "Friends of Marty Robbins" and has been asked to sing his songs with the tribute band at some of its venues.

The featured vocalist for the evening is Dana Matthews, whose talents include lead and harmony vocals, guitar, mandolin and flute. The Arizona native has performed across the United States at rodeos, casinos, festivals and fairs, nightclubs and concerts.

Chuck and Connie Troupe, a country and country gospel husband and wife duo who recently retired to Arizona, are two more highlights of the concert, along with featured youth artists, brother and sister Jordan and Emma Brambila, and the Brush Arbor Revival.

The Prescott Opry performance is sponsored by the Greater Arizona Country and Western Swing Music Association.