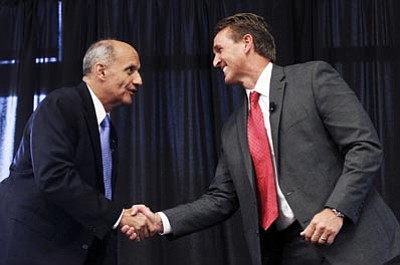 PHOENIX (AP) - As Arizona's U.S. Senate race enters its final days, the two candidates hoping to succeed retiring Sen. Jon Kyl are playing to their strengths: Republican Jeff Flake is calling in presidential hopeful Mitt Romney to help close his argument for victory with the state's conservative-leaning electorate. Democrat Richard Carmona is reaching out to independents and Hispanics, two key voting blocs that could help him pull off an upset.

Flake is asking Arizona voters to pick sides. They're either with him, Romney, Kyl and U.S. Sen. John McCain, or they're with Carmona, President Barack Obama and Senate Majority Leader Harry Reid.

"The stakes are high Arizona. I urge you to send Jeff Flake to the Senate and he'll help get America back on track," Romney says in his appeal to Arizona voters in an ad running during the final week.

Carmona is playing down party affiliation. He's not mentioning Obama or the Democratic Party in his final pitches to voters. "I'm not worried about whose party is in power," he said.

By brandishing his resume and focusing on taking a middle path, Carmona has succeeded in making Republicans work far harder than they ever envisioned keeping Kyl's seat in Republican hands. The closeness of the race is proven through the millions of dollars in outside spending that has poured into Arizona in recent weeks from outside interest groups. Those groups know that Arizona has quickly become a focal point for determining which party controls the Senate over the next two years.

Helping Carmona's standing is the fact that Republicans have in the past been in Carmona's corner and even attempted to recruit him to run for office under their banner. Carmona's campaign has been airing an ad starring McCain and Kyl as they spoke in support of Carmona becoming surgeon general under President George W. Bush.

"Our nation will gain an invaluable leader," McCain said at the 2002 confirmation hearing.

"One might call him a man for all seasons. His unique background will serve him well and serve us well," Kyl added.

The political cross-pollination stung. "Richard Carmona's latest ad is the most shameful of all, implying that Jon and I support him. We don't," McCain said.

As the race has tightened, outside groups such as the Club for Growth and FreedomWorks have targeted the race on Flake's behalf. The League of Conservation Voters and the American Federation of State, County and Municipal Employees have weighed in behind Carmona. In October alone, the groups have spent more than $15 million on the race and voters learned more about Carmona, who entered the race as a relative unknown.

"Flake was initially thought to just sail into the general (election), and he had to battle" in the primary, said Fred Solop, a professor of politics and international affairs at Northern Arizona University. "He lost momentum. He had to raise and spend money to fend off these attacks."

A scarcity of independent polling makes it hard to say exactly how much support each candidate has, but Flake and Carmona agree the contest is close. That has raised the prospect that Libertarian Marc Victor, a criminal defense attorney, could play the role of spoiler -to Flake's disadvantage.

"Congressman Flake took for granted that he was going to walk into that seat," Carmona said.

Flake said he always knew the race was going to be close and noted the heavy flow of money from outside groups.

"We are glad for the help. We have had a lot of money spent against us," Flake said. "This will even it out somewhat, but I think, still, there has been a lot more ads on the other side than from our side."

Outside groups have dumped in an additional $17 million - about 60 percent of which came from Flake backers, according to the Sunlight Foundation, a nonpartisan tracker of campaign spending. The groups have pumped $5.3 million into the race since Oct. 24.

Democrats, including Obama, recruited Carmona to run for the seat after it became clear that then-Rep. Gabrielle Giffords wouldn't campaign because of head injuries she suffered during the January 2011 shooting rampage in Tucson. Arizona's last Democratic senator was Dennis DeConcini, who retired in 1995.

Both candidates have recently focused on Latinos, a group of voters that's believed to favor Carmona.

Carmona said he admires Bush and the late Democratic Sen. Edward M. Kennedy for trying to craft legislation would improve border security and give illegal immigrants already in the U.S. a pathway to citizenship.

Flake has been criticized for changing his immigration views. In the past, he supported proposals that would have revamped guest-worker programs and created a pathway to citizenship for illegal immigrants. But he took a narrower position when he announced his Senate candidacy last year, saying voters won't trust government to fix the nation's immigration woes unless it can first secure the U.S.-Mexico border.

Flake held a news conference last week at a church to announce support from Latino pastors and had to respond to questions from reporters about his chances of winning strong Latino support given his immigration views.

Flake said he's not conceding any group of voters to Carmona and defended his record on immigration, noting that he has taken his lumps over the years from within his party over his efforts to overhaul immigration policies.