Baby owl was worth saving 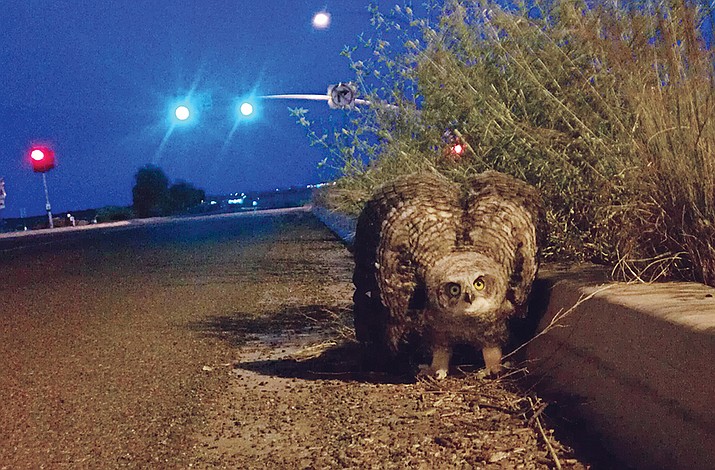 This baby owl looked frightened and alone as cars zipped past on Glassford Hill Road. From what we learned, local police and fire personnel responding to wildlife calls have fewer options because Game & Fish units no longer respond after hours.

I am grateful for local police and fire personnel in Prescott Valley who placed value on a small life earlier this month.

At about 7:30 p.m. the evening of May 15 my wife and I took the Glassford Hill exit off Highway 89A and were alarmed when we almost struck what looked like a stone garden statue placed in the middle of the road.

We made a U-turn to investigate and as we came around two golden eyes and a slowly pivoting head on the statue followed us throughout the maneuver. The statue turned out to be a live baby owl that had fallen from its nest in the overpass.

It was large for an owlet, but still had the downy covering of a hatchling. It clearly could not yet fly and it seemed frightened and alone. We later learned the reason for its unusual size was because it was a Great Horned Owl.

Cars and trucks were zipping past the owlet and we feared it would be struck at any moment. We parked the car and did our best to shoo it to the side of the road where it would be a little safer.

We tried to call Game & Fish, but because of the late hour we ended up contacting the dispatchers at the Prescott Valley Police Department. I was impressed that the dispatchers sent out an officer right away.

Prescott Valley Police Officer Emilio Rodriguez expressed sincere concern for the owlet. We could not see the nest in the dark, and we did not want to move it out to a nearby field for fear that a larger predator would kill it.

Officer Rodriguez explained that they have fewer options because Game & Fish personnel no longer take these kinds of calls after hours. I do not know if this is a new budget restraint, but it sounded like a recent change.

My wife and I had to leave, but Officer Rodriguez assured us he would do something to help.

We later learned from a news article in the Prescott Valley Tribune that he and others had done something -- something above and beyond expectations.

In the news article by reporter Cheryl Hartz we learned that Officer Rodriguez called Animal Control. Animal Control then contacted a bird handler and Central Yavapai Fire District, who found the nest.

One CYFD engine responded, but the ladders weren't tall enough to reach the nest so they got permission from Central Yavapai Battalion Chief Cougan Carothers to send a truck company.

Carothers later explained that while returning the owlet to the nest containing its two siblings, another hopped out and was put back. Carothers noted the owl rescue was a departure from the stereotypical cat-in-a-tree scenario.

"Just when you think you've seen it all, something like this comes along," he said in the article.

In the end, the owlet was saved because police and fire personnel, and a volunteer bird handler cared enough to do something beyond easy.

After learning of this rescue operation some people have expressed concern over whether this baby owl was worth the resources extended to save it. My wife and I are probably the wrong people to ask because we looked into those deep round golden eyes and saw something more than a baby owl, we saw a piece of our amazing world -- a reminder that there is still much wonder and discovery waiting for us in life, and it's worth protecting and respecting.

Thank you Prescott Valley Police and Central Yavapai firefighters for sharing that respect. Thank you also to the anonymous bird handler.

What we do and how we care speaks much louder than our words, and I was proud to tell my children of your noble actions.