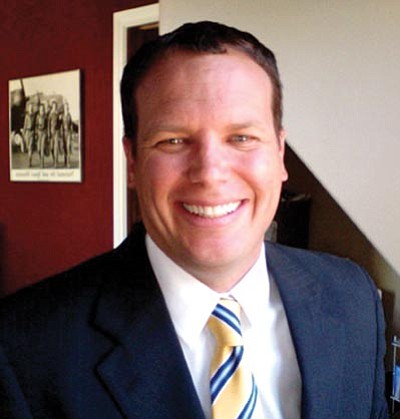 Starting July 1, the friendly, energetic 41-year-old Goligoski will officially assume the A.D. reins. He represented one of two finalists that PHS and its hiring committee considered for the job.

Goligoski, a former Badgers track star who won a state championship in the 800 meters the year he graduated from Prescott High in 1989, has been a member of PHS's Athletics Hall of Fame since 1994 and he has served on the Hall's selection committee for the past five years.

In addition to his duties as athletic director, Goligoski will be the school's Dean of Students, a role White did not have.

A teacher for the past 12 years who holds an administrative certificate, Goligoski said he did not intend to leave the classroom until the school board created this hybrid position in mid-May. Goligoski applied for the job little more than a week ago.

"I always said that if I were going to make that move (to become an A.D.), I would hope that it would be an opportunity to help with instruction and providing the aid and support in the classroom," said Goligoski, who's taught at PHS for a decade. "But also, more significantly, is if I could make some contributions that would positively affect the climate of specifically Prescott High School."

White said he informed PHS principal Totsy McCraley in February that he would be stepping down from what was a part-time position, setting the wheels in motion for her to find his successor.

While praising White for his experience, McCraley said Goligoski understands how the school wants to elevate academics as well as athletics.

"We want to keep kids eligible, and I know that Mark wants to have that happen, too," she said. "Being a former coach here, he understands that. He's got some really good ideas that I know are going to work well. We can only benefit from his energy and enthusiasm."

During his tenure, White labored to upgrade the PHS campus' facilities, including improvements to its Dome gymnasium's roof and interior. However, White said "there's still a lot of work to do," and that completing it will be difficult.

The Prescott Unified School District remains strapped for cash and is "getting very little help from actual taxpayer monies coming into the district" to pay for needed items, White added.

The high school relies heavily on tax credits and donations to maintain its operations, which includes athletics, since state funding has been reduced.

For example, starting with the 2012-13 academic year, Prescott High will not fill a vacant men's equipment manager position because of budget constraints. Another concern is that travel costs will remain high due to the Arizona Interscholastic Association's (AIA) recent budget cuts.

"We did a good job of keeping ahead of the game as far as finances are concerned, although things have kind of dropped off here in the last year or so because of various things," White said. "Something has to give eventually because obviously in order to have a (Badgers athletics) program as important and as valuable to the community, somebody's going to make a decision as to, 'Is this important for the district to support or not?' "

However, White added that the community has always supported sports at the high school, and that the same kind of encouragement will continue under Goligoski's leadership.

Goligoski said he plans to both promote and involve more students in Prescott High athletics while gathering additional contributions from residents to benefit its sports programs. He also wants to take some pressure off coaches by pinpointing solutions to their travel expenses.

"One of the things I'd like to implement next year is basically a PHS athletic advisory council that would involve folks from the school as well as from the community and generate some ideas to help these sports," he said.

No matter what happens, White said he has faith in Goligoski as an advocate for Prescott High athletics, in part because he and his family have firm roots in the city.

White should know. He has worked at PHS for the past 34 years, since 1978, first as a P.E., driver's education and history teacher, as well as a football and track coach, before becoming the A.D.

"He's got no bad points as far as I'm concerned," White said of Goligoski, whom he taught years ago. "He's a hard worker. He was a great teacher in the classroom. He'll make a great administrator. He knows athletics. He knows what the community's all about, which is very, very important in a situation like this."

Goligoski said he has a mutual respect for White.

"Bill's a great example of someone who's always been devoted to the school, and working positively with kids all these years," he said. "I feel really blessed."

White acknowledged that he wants to retire so he can spend more time with his wife, children and grandchildren, and perhaps travel.

On the other hand, he will miss the coaches, athletes, fellow athletic directors, administrators and teachers with whom he interacted through the years in the Prescott area and across Arizona.

"I've seen kids come up that are kids of people that I coached, and I've worked with some of the coaches at the high school that I actually had in class," White said. "It's been fun to see those people get into the (education) system and get into coaching."