'Owl' be seeing you... when I'm just a little older 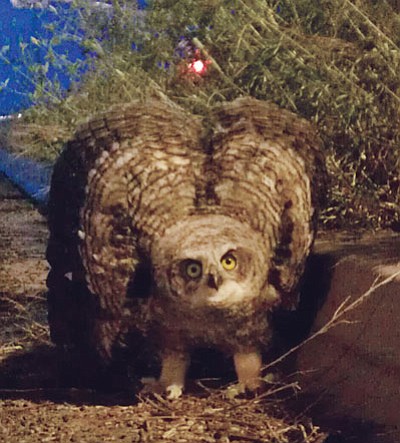 This Great Horned owl youngster had exited its nest near Glassford Hill Rd. and was sitting in the middle of the roadway when passersby shooed it to the curb. A bird handler, with the help of CYFD, put the owl back in its nest.<br> Photo courtesy Richard Haddad

The Ides of May could have been fateful day for an immature owl exploring the outskirts of Prescott Valley.

This past Tuesday, May 15, residents Richard and Debbie Haddad were concerned that evening traffic would hit an owlet sitting in the middle of a lane on Glassford Hill Road. Many cars slowed to watch when the Haddads stopped their vehicle and "shooed" the foot-tall Great Horned owl, snapping its beak and fluffing out its feathers, to the side of the road.

"The owl could not fly and still had that fuzzy appearance on some parts of its body, so while it was large it still seemed like a baby," Richard said.

They first tried to call Arizona Game and Fish, but ended up calling Prescott Valley Police Dispatch. Police Officer Emilio Rodriguez told them Game and Fish no longer comes out at night.

A dilemma arose when the officer didn't want to leave the owlet in the roadway or put it in the nearby field where larger predators could get it.

"One engine responded, but the ladders weren't tall enough so they had to get permission from me to send a truck company," said Central Yavapai Battalion Chief Cougan Carothers.

Carothers said while returning the owlet to the nest containing its two siblings, another hopped out and was put back.

Carothers noted the owl rescue was a departure from the stereotypical cat-in-a-tree scenario.

"Just when you think you've seen it all, something like this comes along," he said.

He also said the owlets need another four to six weeks in the nest. That sets the bird's age at about five weeks, as the species starts climbing from the nest then but doesn't fly well until about 10 weeks of age.

The Great Horned owl is widespread in Arizona, adapting easily to diverse habitat and climate. An opportunistic nester, it moves into existing structures built by other birds, but also uses caves, cliff ledges, holes in cacti - wherever it pleases. The carnivorous owl also eats pretty much whatever it likes, from insects to Great Blue Herons, subduing its prey with large, strong talons.

The nocturnal birds can grow to heights of 25 inches with wingspans up to five feet. Although the Great Horned owl can live more than 28 years, some studies show that nearly 20 percent of recorded owl deaths occur from being hit by cars, according to Owling.com.