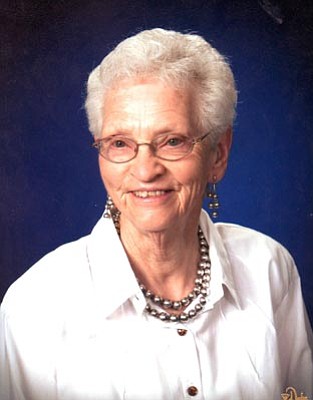 Helen Parry, beloved wife, mother and grandmother, passed away May 15, 2012, after a brief illness. Her husband Edwin was by her side. She spent her last days surrounded by her loving family singing songs that she loved.

Helen was born in Walla Walla, Wash., on May 7, 1925, to Ervin and Juanita Bates. She met her sweetheart Edwin in 1943 and they married on April 17, 1944. She worked for the phone company for over 20 years, retiring in 1983. She was active in Telephone Pioneers working with the Hug-A-Bear project. She was also one of the founding members of the Prescott Questers.

Helen is survived by her sweetheart of 69 years, Edwin; her children Edwin and Kyu Parry, Juanita and Robin Sizemore, Tom and Ramona Parry, Susie and Ron Blackstone and Liz Parry Coats. She is also survived by her grandchildren, Byong and Sun Kim, Eun Joo and Kevin Choi, Scott and Jessica Sizemore, Kristin Sizemore and John Sewell, Amy Corona, Megan Corona, Holly and Tom Eggers and Katrina and Zachary Marcus. She is survived by her great-grandchildren Christopher and Christine Kim and Charles and Mindy Choi. Also surviving are her sister Audrey Goldman and sister and brother-in-law Delores and Roger Miller and sister-in-law Myrtis Bates and numerous nieces and nephews.

She is preceded in death by her parents, Ervin Levi Bates and Juanita Mary Sears, and brother Dale Bates.

A memorial service is pending and will be announced at a later date. The service will be at Prescott United Methodist Church, 505 W. Gurley St., Prescott, Ariz. In lieu of flowers, donations can be given to Hospice Family Care of Prescott.

Although we will miss our sweetheart and mom, we know we will see her again.