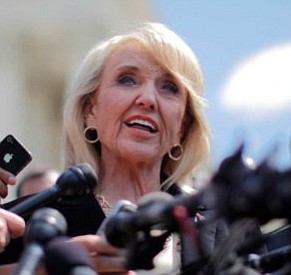 PHOENIX (AP) - Arizona Gov. Jan Brewer on Friday signed into law a bill to cut off Planned Parenthood's access to taxpayer money funneled through the state for non-abortion services.

Arizona already bars use of public money for abortions except to save the life of the mother, but anti-abortion legislators and other supporters of the bill have said the broader prohibition is needed to make sure that no public money indirectly supports abortion services.

"This is a common sense law that tightens existing state regulations and closes loopholes in order to ensure that taxpayer dollars are not used to fund abortions, whether directly or indirectly," said Brewer. "By signing this measure into law, I stand with the majority of Americans who oppose the use of taxpayer funds for abortion."

Arizona has said a funding ban would interrupt its preventive health care and family planning services for nearly 20,000 women served by the organization's clinics. The organization has said it will consider a legal challenge.

"We are most concerned about the women and men who could be forced to go without health care as a result of this bill," said Bryan Howard, President and CEO of Planned Parenthood Arizona. "We remain committed to providing Arizona communities with the professional, nonjudgmental and confidential health care they have relied on for 78 years."

The measure targeting funding for Planned Parenthood for non-abortion services was one of several approved by Arizona's Republican-led Legislature related to contentious reproductive health care issues during a 116-day session that ended Thursday. Brewer is a Republican.

Other approved Arizona bills include one generally banning abortions after 20 weeks of pregnancy, which Brewer has already signed, and one loosening a state law that generally requires health care plans to cover contraception.

On the funding issue, similar attempts in Texas, Kansas and Indiana have resulted in litigation.

States that considered versions of the legislation this year included New Hampshire where lawmakers effectively killed a bill as they heeded warnings that blocking public funding to abortion providers could jeopardize New Hampshire's Medicaid program.