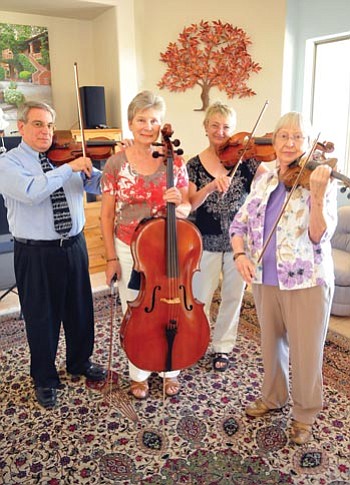 The Prescott Chamber Players will share their enjoyment of music with the public in a special concert Sunday at Trinity Presbyterian Church.

The nonprofit ensemble formed in 1995 and dedicated itself to the performance of small-scale works by classical masters, said George Friedman, a chamber player. The musicians meet once a month in each other's homes and "perform pieces involving anywhere from two to six players, including strings, winds and piano for our own enjoyment," he said.

Twice a year, the chamber players conduct a free concert for the public and welcomes the audience to a free reception after the performance.

Among the ranks of the Prescott Chamber Players, who number 40 in all, are music teachers, amateur musicians and even some professional musicians, Friedman said.

Chamber music itself, Friedman said, began with salon playing in the 18th and 19th centuries, when musicians of varied talent would gather for their own private session. The most common forms were string quartet, piano trios and quartets and various small wind combinations.

"Classical composers recognized that this was a popular market for their works and wrote a great deal of music for these combinations," Friedman said. "Eventually, these smaller forms even made their way into the concert hall, though they are still most often performed in more intimate settings, such as churches, museums and private receptions."

Sunday's concert will consist of eight pieces that are movements from larger chamber works, Friedman said, adding this format will allow a wide selection of composers and players to perform in a one-hour program. Composers for the concert include Dvorak, Faure, Milhaud, Bruch, Stamitz and others.

The performance will include musicians who also play in Prescott POPS, the Prescott Chamber Orchestra and Central Yavapai Concert Band.

For more information about the concert, call Friedman at 772-1648.