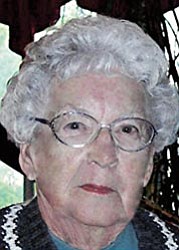 Martha was born March 27, 1915, to William and Jane Bell Weddell in Burlington, Vt.

She was the youngest of five children. She attended Mary Fletcher School of Nursing in Burlington, Vt. Martha was the last surviving member of her generation of family and friends.

Martha and her late loving husband Donald met at a First Congregational Church supper when Martha was 16 and Donald was 17. Martha looked across the room, saw Donald and told her sister, Connie, "That is the man I am going to marry." And they did get married, seven years later. They were married 73 years.

Martha devoted her life to her family and always worked to make life better for those who had little in this world. A lifelong Congregationalist, she was a member of the Congregational Women's Fellowship in Vergennes, Vt., as well as in Prescott, Ariz. She worked in the Community Pantry and was once recognized as Volunteer of the Year for Yavapai Guidance Clinic Thrift Store, where she tirelessly worked for many years.

An avid gardener, Martha loved working with plants. When she was raising children, her vegetable garden was so large Donald had to plow it with a tractor. Martha also loved flowers and planted them everywhere she could. She made friends easily and enjoyed her friends and neighbors and especially enjoyed her family time with her children and grandchildren.

Among many cherished memories, her children and grandchildren recently and fondly recalled Martha always serving pancakes with only "real" Vermont maple syrup. Martha made pancakes for her children almost everyday of their childhoods and continued right on with her grandchildren.

Every Christmas morning, Clark family tradition was Christmas breakfast. Martha set her Christmas morning table with her white Irish linens, her blue Spode china and her sterling silver. Donald would stand at the head of the table, filled with their seven children, with his silver pancake griddle with the little alcohol fueled burners and make pancakes. They were served on warmed plates with warmed Vermont maple syrup and piles of bacon and sausage. THAT was Christmas morning for the children, and eventually many of the grandchildren of Martha and Donald, and it will always be remembered with a smile.

Martha is also survived by six of her seven children, DeWitt Clark of Solomon, Md., Rodney Clark (Lorette) of Prescott, Ariz., Terry Clark (Janet) of Prescott, Ariz., Brian Clark (Deborah) of Sioux Falls, S.D., Jane Belle Clark Lituczy (Paul) of Phoenix, Ariz., and John Clark (Karla) of Prescott, Ariz. She was predeceased by her husband Donald in 2010, and son Daniel who died in a car accident in 1964.

At a future date, there will be a private, graveside service at Mt. View Cemetery, Prescott, Ariz., officiated by Pastor Jane Cheek of First Congregational Church.