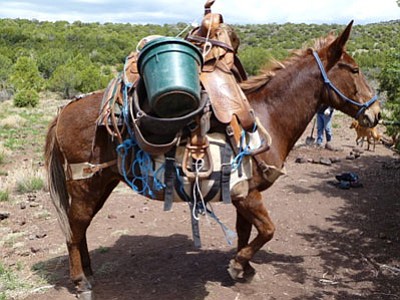 Renamed McCabe, this Molly mule substitutes as the new Dewey-Humboldt Historical Society’s mascot. The 16-year-old pack mule belongs to Kevin Leonard who says she’s in her prime as mules live to be 30 or older.<br> Courtesy Photo

Kevin Leonard, owner of a 16-year-old Molly mule, said his pack mule Judy "has more miles on her than any other mule in Yavapai County."

Judy is the new doppelganger mascot mule for the Dewey-Humboldt Historical Society, and she's sporting a new name - McCabe.

The Historical Society issued a call to D-H students to "Name that Mule" during its most recent fundraiser on April 14, and Jesse Chisholm won the honor of naming the mascot mule McCabe.

Chisholm, a seventh-grader at Bradshaw Mountain Middle School, won two Harkins Theatre movie tickets, a gift certificate to a local restaurant, and one of Leonard's books in which Judy figures prominently.

The April 14 Cowboy Bolo Tie and Potluck Dinner and Dance raised more than $1,700 for the Historical Society, Leonard said, despite the wind, rain and snow. The fundraising event took place at D-HHS's newly-rented museum building where members showcased a portion of their artifacts and historical items.