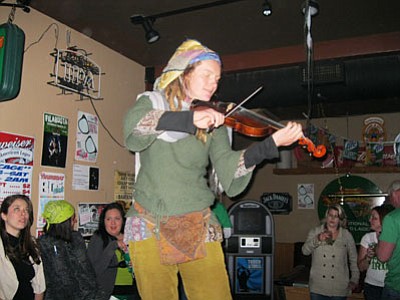 Most of downtown Prescott suffered a power outage in the middle of one of the busiest evenings of the year for local bars and restaurants.

But the St. Paddy's Day spirit prevailed: When the band at Coyote Joe's couldn't play their electric instruments, Maggie Dewar with the Mural Mice art collective jumped on top of a pool table and performed a jaunty tune on her violin for an appreciative audience.

"I'm playing music for the masses," she quipped with an Irish burr and a laugh.

Several patrol cars were on hand, and a police officer on the scene said everything was under control as of 9:45 p.m., though many establishments were pitched into complete darkness, with patrons using the light from their cellphones to guide them. Many people were talking and laughing inside and outside the venues.

Traffic lights were also out in the area, forcing drivers to stop at every intersection.

All four feeders at the Arizona Public Service substation on Granite Street failed for unknown reasons at about 8:45 p.m. Saturday night, blacking out an unknown number of customers in downtown Prescott, APS spokesman Matt Meierbachtol said.

"We don't know what happened," he said. "We have troublemen at the substation investigating. We will restore power as soon as we can."

Check the Courier and dCourier.com for more details.