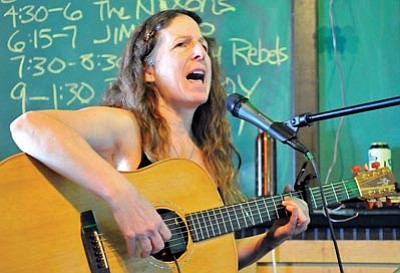 St. Patrick's Day is Saturday. It's the first time the holiday falls on a weekend since 2007, and that could be a boon for bar-hopping events like the Prescott Pub Crawl.

"We want people to come, be safe, have fun and enjoy the company," said organizer Adrian Medina, state general manager of Canyon Distributing Co. "It gets you out and you meet hundreds of people in a short time."

Registration is free; libations are not. You can sign up at participating venues before Saturday, or at the starting point the day of the event.

This year's crawl begins at 3 p.m. at Murphy's and ends at Matt's Saloon.

"We have a bagpiper, there's a band and it's one big party in here," said Stephanie West, a bartender at Murphy's. "I'm busy all day, but it's still fun."

Medina's hoping to boost attendance from the 350-400 range to about 500, although the weather doesn't look promising.

As of Thursday evening, the National Weather Service's Flagstaff office had issued a Saturday winter storm watch for Prescott.

The forecast calls for afternoon winds of 20-25 mph and evening rain turning to snow, maybe 2 to 5 inches, as temperatures drop from the 60s to the 30s.

"It's not completely unheard of, but that's a pretty strong storm for this time of year," said Justin Johndrow, a meteorologist in the Weather Service's Flagstaff office. "Whatever people are doing on Saturday night, they should keep an eye on the weather because it could definitely impact their travel plans."

Five inches of snow dropped on Prescott on St. Patrick's Day in 1986, the last time it snowed on March 17, according to Weather Service records.

"There's actually a pretty good chance it could be rain until after midnight," Johndrow said. "It may push in to Sunday."

The Prescott Pub Crawl is its seventh year, although similar events have waxed and waned in decades prior, including the Back Alley Parade.

It's no wonder, considering the area's storied past of Old West saloons.

"Whiskey Row has a thick history, and it's really convenient to have all those locations close together," said Medina, who organizes similar events in Kingman and Yuma. "That makes it a lot easier to have a big event and see a lot more of the area."

If you storm every bar before 9:30 p.m. - and assuming you remembered to get your card punched by the powers that be - you can enter a raffle at Matt's Saloon for four prize package.