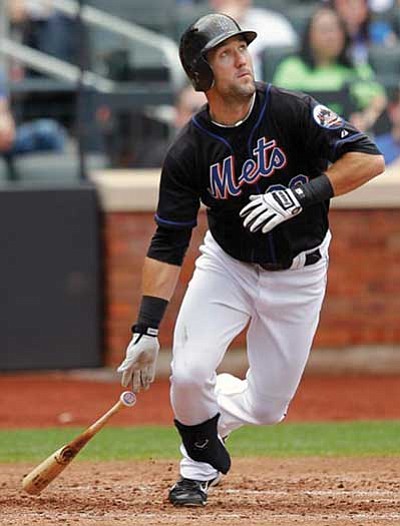 The San Francisco Chronicle first reported Pridie's violation Friday afternoon on the newspaper's website and the Associated Press picked up the story on the wire a short time later.

Speaking on condition of anonymity because details had not been made public, the source of the information told the newspaper the 28-year-old Pridie's infraction was for a drug of abuse, or recreational drug, rather than for a performance-enhancing drug, such as steroids or human growth hormone (HGH).

The 6-foot-1, 205-pound Pridie is not expected to appeal the suspension if it happens, the Chronicle reported. The newspaper added that this incident marked Pridie's second positive test for recreational drugs. According to the testing policy, a player's first positive drug test is confidential.

The Daily Courier called Pridie multiple times Friday and left messages seeking comments about the situation, but he did return the calls prior to press time.

If Pridie is suspended, he would not begin his suspension until the regular season starts, meaning that he could continue to work out with the A's and appear in Cactus League games this month in Phoenix.

The Athletics signed Pridie to a minor-league deal on Nov. 15, 2011, five days after the New York Mets sent him outright to Triple-A Buffalo.

However, the Chronicle added that Pridie's future with the A's is in doubt. He is currently a non-roster player who has gone 1 for 7 with a double in four exhibition contests through Friday afternoon. Oakland also has several other talented outfielders.

Last season while playing center field for the New York Mets, Pridie enjoyed a bit of a breakthrough in the major leagues. The Phoenix native batted .231 with four home runs and 20 RBIs in 101 games, crushing his first major league home run against the Arizona Diamondbacks late last April in New York.

But in the off-season in November, the Mets released Pridie, who subsequently cleared waivers and wound up with the A's.

Pridie first made a name for himself at Prescott High School in the early 2000s. He led the Badgers varsity baseball program to its first-ever state championship in 2002 as a standout senior. In September 2011, Pridie was inducted into the Prescott High Athletic Hall of Fame for his contributions to the school.

In 2002, the Tampa Bay Devil Rays (now the Rays) drafted the then-18-year-old Pridie in the second round directly out of high school.

Three years later, he went to the Twins organization, returned to Tampa a year after that, was traded back to Minnesota a year after that, and was placed on waivers before being taken by the Mets in February 2010. In between, Pridie crisscrossed the country, playing for eight minor league clubs.

In addition on Friday, the AP reported that two 50-game suspensions were handed out for violations of the minor-league drug program.

Pitcher Mitchell Taylor, who is currently in the Toronto Blue Jays organization, and free-agent pitcher Matthew Rusch were each penalized for a second violation for a drug of abuse.

The AP reported that 20 players have been suspended this year under the minor-league drug program, including seven for drugs of abuse.