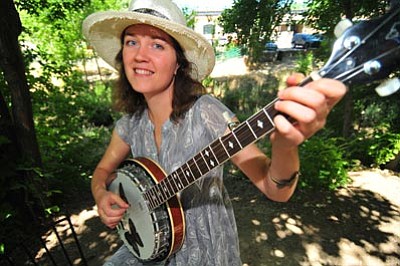 Les Stukenberg/The Daily Courier<br> Annabeth McNamara was an easy choice for event organizer Tom Agostino, who viewed her video for about a minute before signing her up. <b><a href="http://www.youtube.com/watch?v=RoX0plpq4Pw&feature=youtu.be"target="_blank">Click here to view video</a></b>

PRESCOTT - Inspiration is not a difficult thing for Annabeth McNamara.

"I could just write a song every day," McNamara said recently as she talked about her budding music career.

With a focus in integrated arts at Prescott College, she never really studied music exclusively. But she had been playing the piano since age 8, and she was raised by musical parents.

Ultimately, she found her "indie" voice and created a music video as a part of her senior project at Prescott College. Now, with seven months of touring Europe as a folk musician behind her, McNamara is focusing on songwriting and performances at local venues.

Her songs will be on display Saturday night, when she joins headliner Celia and fellow folk performer Alexa MacDonald in the "Women in Song II" concert, the first installment of this summer's Folk Sessions at the Highlands Center.

They may have come to folk music through different avenues, but the women performing at the Folk Sessions this weekend exhibit a common love for the art.

"I was a step-dancer," Celia said this past week in a telephone interview from the road. She also played the piano early on.

After earning a degree in theater, Celia (who uses just her first name) combined her two loves into a show that veers from the "Celtic woman sound" to comedy to theater.

"I love to combine the silly with the sacred," Celia said, noting that her performances have been described as a cross between Enya, Joan Baez and Tina Fey. "My shows are very much like shows."

Tom Agostino, organizer of the Folk Sessions, attests to the power of Celia's shows. "Celia is an incredible live performer," he said. "One of the best I've seen."

Agostino pointed out that Celia also was the lead performer for last year's Women in Song event, and she made her mark on Prescott.

"She moved here (to Prescott) following that concert, so I thought it would be fitting that she was the headliner again," Agostino said.

Celia said she uses her Prescott home as a base for extensive traveling for shows throughout the country. This past week, she was returning from two weeks of performances in Illinois.

"I'm still thrilled to be in Prescott," she said. "There are so many good pieces there."

When she does get home, Celia said she tends to write and record, and has done limited local performances.

McNamara, on the other hand, has performed frequently at the Raven in downtown Prescott.

Agostino recalls that he was looking for a unique performer to add to the Folk Sessions lineup when he received an email from McNamara.

"She was so delightfully different," Agostino said of the 25-year-old singer and guitar and ukulele player.

After listening to just more than a minute of the video that McNamara had sent, Agostino was sold. He called her and asked her to join the Folk Sessions show.

"It was perfect timing for Annabeth to be a part of the show," Agostino said.

The YouTube video that McNamara sent to Agostino offers an engaging glimpse of her style. With a wispy voice and whimsical ukulele accompaniment, she reflects on "Home."

"Don't lose yourself," she intones to the camera, as she wanders through familiar Prescott sites at Granite Dells, Watson Lake, and the Sierra Prieta overlook.

Although McNamara's parents were from Ireland, she said it took some time for her to adopt the music of her ancestors.

"It's kind of cool that I discovered folk, discovered the music of my Irish roots through indie folk/pop," McNamara said.

Her path to folk music is not unusual among young artists, Agostino said.

"There is this whole new generation of kids Annabeth's age that came into this music from indie roots," he said. "It's so nice."

Joining Celia and McNamara will be MacDonald, a traditional folk performer who Agostino describes as "a wonderful singer and songwriter."

The Women in Song II concert will take place at 7 p.m., Saturday. Part of the proceeds will benefit the Coalition for Compassion and Justice's Community Circles.

Future Folk Sessions at the Highlands Center include:

Admission for the Folk Sessions is $12.50 in advance, and $15 at the door. Tickets are available at the

gift shop at the Highlands Center for Natural History, 1375 Walker Road, or online at www.folksessions.com.