Prescott rodeo marks 125th anniversary with celebration of its history 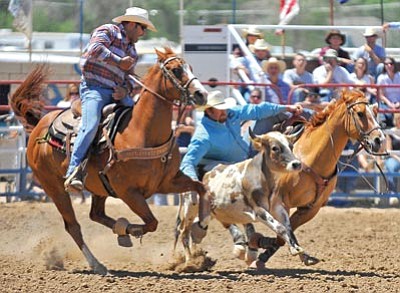 It's fitting that the Prescott Frontier Days Rodeo is celebrating a major milestone this summer.

While 2012 marks the Grand Canyon State's centennial, it also represents the 125th anniversary of the "World's Oldest Rodeo" that dates back to 1888.

Labeled as one of Arizona's official centennial events, Prescott Frontier Days will run from Thursday, June 28, through Wednesday, July 4, with eight performances at the Prescott Rodeo Grounds, 840 Rodeo Drive. (See schedule graphic on page 6B)

"Being the 125th, and also the state centennial, we've kind of made a little second effort (with the rodeo this year)," Prescott Frontier Days General Manager J.C. Trujillo said.

For example, toward the beginning of the three live performances July 1, 2 and 3 - after the live horse races and steer wrestling - the rodeo will feature the original Arizona Cowpunchers Bronc Riding, which shows audiences how the frontier cowboys started the beloved sport more than a century ago.

In the late 1800s, cowboys hopped on a bronc and rode for a limited time, unlike the modern professional riders.

Arizona Cowpunchers saddle bronc riders compete in their working attire, complete with chaps and everyday stock saddles. By rule, a rider must stay aboard his horse for 8 seconds, riding with one hand while keeping both stirrups.

"Our parade and our rodeo theme this year is, 'Where It All Began,' so that's why we're featuring this Arizona Cowpunchers Bronc Riding," Trujillo said. "They don't have to spur, and they ride their own stock saddle - the same saddle they would ride out on the ranch.

"Most of these guys entered here are cowboys off of the ranches from around Yavapai County. That's the original way rodeo actually got started. It was the old cowpunchers around on all the rodeos getting together and saying, 'Hey, I got a bronc that none of your guys can ride.' And the other guy says, 'Well, I've got a guy that rides broncs really good.' "

In addition, Prescott Frontier Days has honored its 125th year by publishing small historic photos of past rodeos on the pages of its glossy-print 2012 programs, which cost $5 apiece.

"There is a lot of great old-history pictures, especially in each event," Trujillo said of the program. "What they did was show old Prescott and then modern-day Prescott rodeo."

Prescott Frontier Days President Diane Judge-Cox said this year's anniversary gives the rodeo an opportunity to highlight its long-standing "tradition" in the city.

"People come from all over the world (to see this rodeo), so it's not just Prescott that knows all about Prescott Frontier Days," she said. "It's the world's oldest and the world's best. And we're hoping to have a super successful year for our 125th and the centennial as well.

"Every year we've improved and streamlined and made the rodeo better - and it has come together so well."