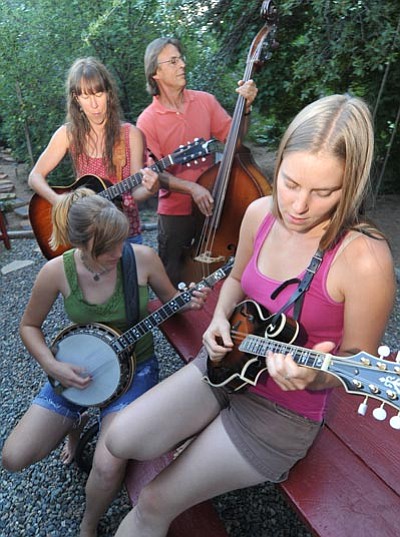 Les Stukenberg/The Daily Courier, file<br> “Just 4 Mama” is Christine and Jim Davis, rear, and their daughters Chloey, on banjo, and Hilary on mandolin.

Ryan Shupe and the RubberBand, which got the crowd dancing with its upbeat performance at the 2004 Prescott Bluegrass Festival's evening performance, will headline the 31st annual festival this weekend.

The band has opened for 10,000 Maniacs and Creed as well as country legends such as the Nitty Gritty Dirt Band, Trace Adkins, Trisha Yearwood and Sawyer Brown.

"RubberBand's unique style, which blends influences of rock, country, folk and jazz, provided for a texture that evoked images of Dave Matthews Band gone bluegrass," MTV.com wrote of the group.

Shupe will perform more traditional bluegrass songs during the day Saturday, then offer more of a "newgrass" sound at 7 to 9 p.m. Saturday night, Currey said.

This year it is moving to the south side of the plaza where there is more room for lawn chairs. Food vendors and a small arts and crafts festival will be nearby.

Dry camping is available for $15 per night on the nearby Mile High Middle School football field next to Granite Creek. A camp host is on site, and campsites are first come, first served.

Other bands at this year's festival are the Sonoran Dogs, a seasoned five-man band headed up by Peter McLaughlin from Tucson, who won top honors at the National Flatpicking Championship; the Burnett Family Bluegrass band from Flagstaff, which won the Telluride national band competition; and the Virtual Strangers, Arizona Bluegrass Band contest winners who also hail from the Copper State.

Williams performed at the first Prescott Bluegrass Festival 31 years ago with the band Scenic Route. Bob Lockett, a member of the festival organizing committee for all of its 31 years, also was a member of that band.

"He had a beautiful, beautiful voice and sang a lot of lead parts in the tunes we played," Lockett said.

Those who wish to support the legacy of bluegrass music in Prescott can now become local Friends of Bluegrass via the Prescott Bluegrass Festival website at prescottbluegrassfestival.com, where the festival performance schedule and other information also is available.

After a hiatus of nine years, during which time a dedicated group of local volunteers kept the festival alive, the Prescott Chamber of Commerce is again heading up the organization of the festival. It's no small task since it costs approximately $22,000 to produce each year. A solid list of sponsors has been key.

Currey is the special events director for the Prescott Chamber but donates time to the festival because he enjoys it so much, especially when he sees so many people having fun.

"If I could continue to live my life putting a smile on faces, it's worth all we go through," Currey said.