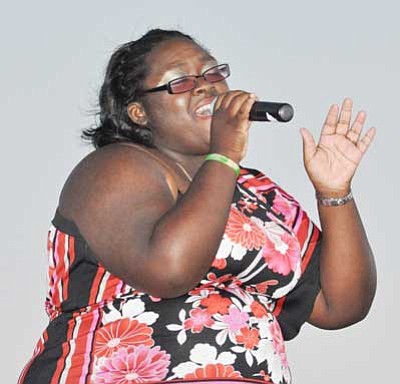 For Nicosia "Coco" Garrison, performing in Prescott Valley's annual singing extravaganza, "PV Idol," was another place to do what she loves best - sing. Winning, she said, was the "icing on the cake."

Garrison qualified at Prescott Valley's Buffalo Wild Wings for the finals of the event that culminated in a big show on the stage outside Tim's Toyota Center during Prescott Valley Days Friday night. After impressing judges with her huge voice and heartfelt renditions of "I Know Where You Have Been" and "Listen," she emerged at the top of the 12 finalists who sang on Saturday.

Judge Louisa Tennille, who sang backup for the hit duo Captain and Tennille during the mid-70s and early 80s, praised Garrison's style, noting, "She sang from the heart!" On a later Facebook posting, Tennille told Garrison, "You rocked to Mars!" Fellow judges and longtime musicians Danny Anderson and Pete West concurred, and Garrison walked away with a big trophy and a huge smile.

Second and third places in the competition were two local women, Haley Die and Danyelle McMullin, who both qualified at Donna's Hut. Die sang a heartfelt version of "How Do I?" to pull judge's heartstrings, and McMullin connected with the audience on a rollicking rendition of "Redneck Woman" to make it into the top six. Die then showed her versatility with a faster number, "Long Time Gone," and McMullin did the same with a slower song, "Take A Bow" for the wins. Rounding out the top six were Anthony Sotelo, Kela Hedtke and Jasmine Pauley.

Garrison is a 26-year-old vocal performance major at Yavapai College who entered her first talent show at age 5. The Prescott Valley resident graduated in 2003 from Prescott High School, where she played flute and piccolo in the marching band, performed in choirs, and achieved regional honor choir two years running. She credits choir teacher Amy Van Winkle for encouraging her to continue singing.

"She kept pushing me forward, 'try this, you can do this.' I learned so much from her," Garrison said.

Music was a big part of her life as she grew up, Garrison said. Her parents, Geri and Leonard Garrison, both sang and played instruments, and her mother directed a children's choir and an adult choir at church.

"There was always music in our house," she said. "Mom was always singing, and my grandma played the piano and sang at church. Everyone sang."

She also is proud of her little sister Jalen, who at 13, she said, is a good singer and an even better actress.

Garrison had never entered the Prescott Valley Idol competition, whose most famous past winner is X Factor phenom and Chino Valley resident Drew Ryniewicz, because she seemed always to miss the audition deadline.

"I've had friends in it for several years in a row, but I would never find out when the auditions were until it was too late. This is the first time I've gotten a chance to be in it," she said.

Garrison said she wasn't nervous during Saturday night's performance, even as the pressure mounted for the final six contestants, because she just loves a chance to sing anywhere, anytime.

"It's like when you get a job working at something you love to do, it makes it that much cooler. I love to sing, and I won a trophy for it. That's super cool!" she said.