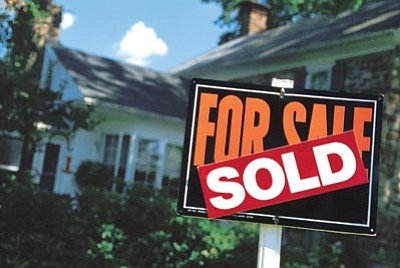 Lower interest rates and other factors stimulated more home sales during the first five months of the year than from January-May 2011, Prescott Area Association of Realtors executives said.

However, the average sale prices of homes declined overall in the quad-city area, according to data supplied by PAAR Treasurer Pete Weaver. PAAR has more than 1,000 members.

Sale prices fell on average in the Prescott area and Dewey-Humboldt even though inventory levels throughout the area have dropped thanks in part to fewer "distressed" homes (foreclosures and short sales) on the market.

"There have been some subtle improvements in the economy," Weaver said Tuesday.

Citing PAAR data, Weaver said Realtors sold 1,111 residential properties from Jan. 1 through May 31 in the quad-city area, up from 1,092 during the same period in 2011. The properties include single-family homes, townhomes, condominiums and manufactured homes.

In Dewey-Humboldt, home sales numbered 86 in the five months of this year, down from 91 in the same time frame in 2011.

Sales prices generally are "trending up," PAAR President Josh Lethbridge said. "Market times are shorter. Days on the market are shorter. Our inventory levels are down. And the number of available foreclosure properties has decreased. All of that has led to a really active real estate market right now."

However, Lethbridge, who has worked 16 years in real estate in Prescott and is owner/broker of Liberty Management Group, expressed some pessimism.

"We are not sure that the economy has been completely repaired," he said.