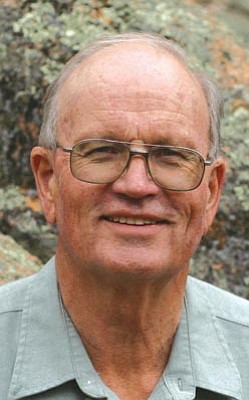 Jim grew up in Chino Valley and graduated from Prescott High School, participating in basketball, band, choir and the National Honor Society. He attended Yavapai College and Arizona State University, receiving a B.S. degree in economics. He served a mission for the Church of Jesus Christ of Latter-day Saints in Mexico. He then worked as a truck driver for Bunker Sawmill, his brother Keith's business, until his death.

He married Ronnie L. Caldwell in the LDS Temple in Mesa, Ariz., on July 5, 1979, and they were blessed with six children, Mari Jeanette Bunker Moody (John), Vernon Robert Bunker (Britney), Jamie Lyn Bunker, Neil Edward Bunker, Stephanie Ann Bunker and Rebecca Leigh Bunker. They have five grandchildren, with another to arrive shortly. Jim felt that his family was his greatest accomplishment.

He also enjoyed serving his community and promoting its growth. He spent 10 years on the town council with one term as mayor. He was involved in the schools and many other community activities. He loved Chino Valley and envisioned a future of vibrant economic growth and plentiful jobs.

Jim was preceded in death by his parents and sister, Kathy Graham, and brother-in-law Christian Wells.

Funeral services will be at the LDS Church on West Perkinsville Road in Chino Valley on Saturday June 16, 2012. Visitation will be from 9:30 to 10:30 a.m. with services to follow at 11 a.m. Memorial remembrances may be made to the Perpetual Education Fund of the LDS Church, care of Bishop Michael Calhoun, P.O. Box 5400, Chino Valley, AZ 86323.

Hampton Funeral Home in Prescott was entrusted with the arrangements. Please sign his guestbook at www.hamptonfuneralhome.com.