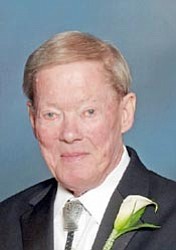 Arlo Beattie passed away April 24, 2012, at his home in Prescott, Ariz., after a brief illness. He was surrounded by his wife and sons at the time of his passing.

Arlo was born in Bismarck to John "Jack" and Dora Beattie on Sept. 24, 1930. He was educated in Bismarck, graduating from Bismarck High in 1948. He attended Bismarck Junior College and North Dakota State University, graduating with degrees in architectural engineering. He wed LaVonne Bohrer, his bride of 60 years, on Dec. 28, 1951.

After a brief stay in Akron, Ohio, working for the Goodyear Aircraft Company, Arlo and LaVonne returned to Bismarck. Arlo started his own architecture firm, Arlo C. Beattie Inc., in 1961. Over his career, he designed and supervised the building of the First Presbyterian Church, Wachter Junior High, the Combined Law Enforcement Center, Grimsrud Elementary School, Miller Elementary, the Elks Club in Bismarck as well as schools in Linton, Beach and Streeter, to name a few. He also did work for the state with projects at the legislative chambers, the governor's residence and the state penitentiary. Some of his most enjoyable projects were for the Gold Seal Foundation in Medora, supervising the building of the Medora Hotel and the Ferris Store to be historically accurate.

He received the Test of Time award in September 2002 from the North Dakota AIA for the design of the First Presbyterian Church. The award acknowledges significant contribution of timeless design.

He was a member of the First Presbyterian Church, the El Zagel Plainsmen, the Moose Club and the Elks Club.

Arlo closed his Bismarck office in 1980, "retiring" at the age of 50. The truth is, he continued to work as a consultant to architects until just two years ago. All his work was completed in his office in the home he designed and built in Prescott.

Arlo is survived by his wife, LaVonne; his sons Bruce, Brent and his wife Andrea, and Brian and his wife Sharon; and his twin brother, Claud. He leaves behind six grandchildren and three great-grandchildren.

He was preceded in death by his parents, John and Dora; his stepmother, Roberta; his sister, Thora McLeod; his brother, Robert; and a great-grandchild, Logan.