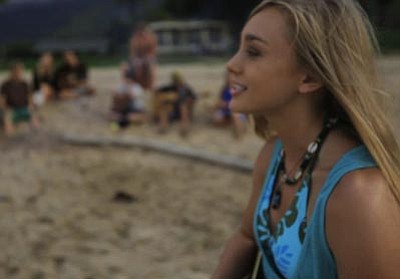 Paradise Found Records/Courtesy photo<br> Madison sings at Hanalei Beach in the video for “Those Boys.” The Prescott native has found a home - and a career - in Kaua’i.

Madison, a 13-year-old Prescott native, is making a name for herself on Hawaii's music scene, growing a strong online following with three original songs on iTunes, two videos on YouTube, and her first album coming out soon through Paradise Found Records.

Madison started vocal lessons at eight, sang in Prescott Idol at 12, and performed in the finale at Elks Theatre.

At that time, though, she enjoyed playing football more than singing.

So her grandmother Tonni Riley, a veteran songwriter and award-winning lyricist, invited Madison to Kaua'i last summer as she worked on songwriting projects for several recording artists.

There, Madison fell in love with the music business.

" I've found I'm happiest when performing and sharing my music with others," Madison said. "I feel like this is what I was born to do. I hope to become an international recording artist, touring the world someday."

Madison, who recently completed 7th grade at Prescott Mile High Middle School through online classes, not only sings, but plays acoustic guitar and ukulele. She is backed up at her performances by a team of seasoned musicians.

Madison, who said her greatest influences are Caillat, Adele, Maroon 5 and Eva Cassidy, has a twice-weekly standing gig at The Princeville Center on the North Shore that draws an ever-growing crowd of fans, many of whom found her videos on YouTube.

Madison's video for "Those Boys," released a month ago, received more than 20,000 views, and she's reached over 50,000 total views in two and a half months, Riley said. Many younger girls like to come up front during Madison's shows to sing her original songs, "Shy Girl" and "Those Boys" with her, and a few fans posted covers of Madison's songs on YouTube.

Madison understands the importance of being a positive role model for girls interested in music and offers some advice to other hopefuls.

"It takes a lot of faith, hope, patience, commitment, hard work, and sacrifices to make it in the music industry," she said, noting Taylor Swift is one of her role models. "If you dream of pursuing a music career, then realize it's a journey not a destination point. Do something every day to develop and improve your skills. Practice, practice, practice, and strive to be the best you can be always."

Last week, Madison was the featured headliner at the Kaua'i Music Festival Showcase, and more than 450 people tuned into a webcast of her live performance.

Madison collaborates with her grandmother on her original songs, honing her songwriting skills under Riley's guidance.

"Madison is especially talented at creating the music side of our songs, coming up with chord progressions, melody, her own dynamics, and putting her signature style on anything she takes on," said Riley. "She gives every song her own unique sound, even when she takes on covers."

Madison said her favorite co-written song so far is "I am just a Girl," which will be on her album of the same name available in a couple of months on CD, as well as through iTunes and amazon.com.

"We both believe we were put together as grandmother and granddaughter to create beautiful music together," Riley said.

Madison plans to come to Prescott this summer or fall to perform a concert, once a thousand Facebook fans in Arizona "like" her page at facebook.com/madisonparadisefound.

Between being home-schooled by her grandparents and working on her music career, Madison said she finds plenty of time to surf with her uncle, snorkel, hike, play videogames, ride horses, talk with her parents and siblings in Prescott each day by phone, and go to the beach.

Recently while Madison was playing in the surf with her friends, Riley spoke with several people, including Colbie Caillat, one of Madison's role models.

"Madison only found out about it once she got out of the water, and Colbie had just left," Riley said.

Guiding and protecting Madison is important so she can live a wholesome life and not be swallowed up by an industry notorious for doing that to young artists, Riley said.

"Our number one goal is for her to come out the other side a healthy, happy, well grounded and rounded adult," Riley said.