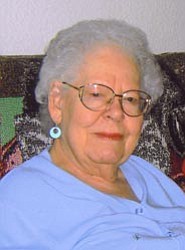 Marjorie Steinborn, born June 15, 1922, in Polk County, Ore., was a descendent of an old Oregon pioneer family, and lived most of her life in and near Portland, Ore. She passed away June 5, 2012, in Prescott, Ariz.

She married her husband, Robert (Bob) in 1942. She and her husband moved to Rio Rancho, N.M., in 1994, then to Prescott in 2000. She was an active volunteer with the Boy Scouts and later with the Elks Club. She was an excellent cook and homemaker, and was an avid reader of mystery novels. She was a master at cross-stitching, knitting and sewing.

Marjorie is preceded in death by her father Frank and her mother Crystal Matthews. She is survived by her husband of 70 years; and her son and daughter-in-law, Terry and Sheila (Savannah) Steinborn of Prescott.