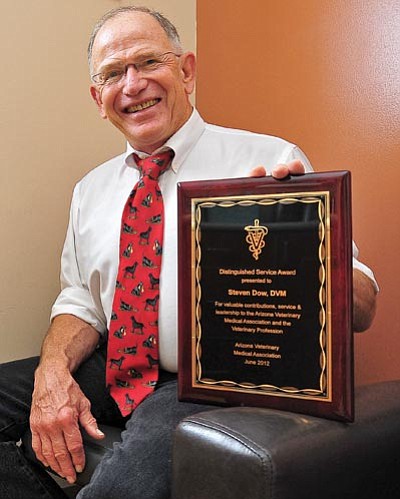 PRESCOTT - Steven Dow has fond memories of growing up with dogs, cats and horses.

A native of North Platte, Neb., Dow has spent most of life in Arizona. As a youth, he worked on his grandfather's horse and hay business in Glendale.

For that matter, it seemed only natural that Dow would choose veterinary medicine as a career.

After he served a stint in the U.S. Army as an airborne ranger captain in Vietnam, Dow earned a master's degree in animal physiology from the University of Arizona and a doctorate in veterinary medicine (DVM) from Colorado State University in 1978.

Dow started his career as a dairy veterinarian in Snohomish, Wash., but moved a year later to Prescott.

"That rain got rid of me after a year," Dow said. "I have been here ever since."

Besides devoting time to his practice, where he is the managing partner, Dow has devoted considerable time to professional activities.

Dow also belongs to the Arizona Livestock Incident Reporting Team, and is trained as a first responder for bioterrorism and animal diseases spread from other countries.

In appreciation for his involvement, the state association presented him with the Distinguished Service Award for 2012.

"He is obviously a very dedicated and accomplished individual," said Emily Kane, executive director of the association, which counts about 1,100 veterinarians among its members. "He has dedicated his life to the practice of veterinary medicine, and he is always striving to improve his skills and the profession."

Dow also has mentored young people who have expressed a career interest in veterinary medicine. His son, Cameron, and daughter-in-law, Amie, are part of the veterinary team at Prescott Animal Hospital.

Dow said he has had two hip replacements and underwent neck surgery. However, at age 64 he has no immediate plans to retire.

"It's a hobby and a lifestyle career," Dow said. "You've got to love it. Long hours. It's like farming."