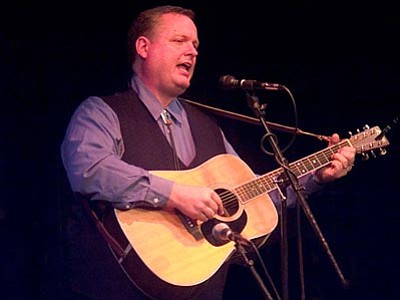 Courtesy photos<br>Singer and songwriter Jim Pipkin, who writes and sings of Arizona and life, and Three-Legged Dog, a trio of multi-instrumentalists, perform tonight in a Folk Sessions concert at the Highlands Center for Natural History.

Popular Phoenix musicians come to Prescott tonight to perform in the AMAZ Radio All-Star Review on the Highlands Center for Natural History stage.

The show starts at 7 p.m. and features Joe Bethancourt, Linda Bilque and Friends, Jim Pipkin and Three-Legged Dog, all well known entertainers in the Valley.

Bethancourt has been plucking banjo strings, as well as guitar, for 50 years, playing folk and bluegrass music, said Bob Zucker, general manager of AMAZ Radio, which is sponsoring the show.

Bethancourt "is a legend in the Phoenix area," Zucker said, noting that he appeared once a week on the Wallace and Ladmo children's TV show to demonstrate different instruments to the young viewers.

Bilque, a singer and songwriter "is the female version of Willie Nelson," Zucker said. The folk singer has a "little different - but very enjoyable - voice." All her songs are original, he said. And, "You never know what 'friends'" she brings to shows, because they are always different musicians.

Pipkin, also a singer/songwriter, has written songs about Arizona and life always, Zucker said. Among his most notable songs is "Fireline," which is about six prisoners who died fighting a forest fire near Payson in 1992. Dolan Ellis, Arizona's official state balladeer, placed this song in the Arizona Music Archives, Zucker said.

Three-Legged Dog is a trio of multi-instrumentalist musicians whose genre is Americana - folk, blue grass and a little bit of country, Zucker said.

AMAZ Radio is a Phoenix-based internet radio station that plays and promotes folk, acoustic, Americana and independent music around the clock seven days a week. Its website is www.amazradio.org.

Zucker has brought performers to Prescott before, including Rosanne Cash and Karla Bonoff, who appeared in concerts in the Elks Opera House in 2004 and 2005 before its renovation, Zucker said.

Tonight's concert is one in a series presented by Prescott's Folk Sessions. Zucker has "long been a sponsor and supporter of the Folk Sessions," said director Tom Agostino.