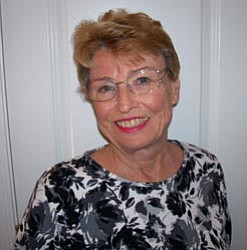 Barbara Jean Rollins, born Barbara Jean Scott, May 8, 1935, in Hollywood, Calif., loving and loved wife of Melvin Rollins, survived by daughter Victoria Winkler of San Diego and Richard Rollins of San Jacinto, Calif., also by adoring grandchildren, Ryan and Natalie, whom she doted on, and

Taylor Geiger, son of Richard, left this world to join her maker July 3, 2012, in Prescott, Ariz.

Raised in Hollywood, she performed as a child in many movies and graduated from Hollywood High School and UCLA to become a teacher in the Los Angeles Unified School District. She taught sixth grade and directed the school choir.

While teaching, she met her future husband and the two tied the knot. The two taught and attended many educational conferences while husband Mel was a president of the local Association for Childhood Education chapter. Living in the San Fernando Valley, Calif., they raised three children, lots of organic vegetables and fruit, and even a couple of chickens for fresh eggs.

She took leave to raise her children, although she had to work as a substitute in order to help pay the bills. In the '60s, teachers didn't make a lot of money. Barbara was very interested in nutrition and chemical-free food for raising healthy children.

A second career commenced when she and her husband Mel purchased a "Numero Uno Pizzeria and Italian Food" restaurant in Lakewood, Calif. They operated this restaurant and also bought and operated two "Fantastic Sams" hair salons. Together with her husband and the children, they managed to do all this while Mel was still teaching.

After 10 or so years, they sold the businesses and Barbara began a third career with H & R Block as a tax preparer. She worked in locations in El Toro, Long Beach and Orange, Calif., prior to moving to Prescott where she completed over 20 years total preparing taxes. She was loved by co-workers and clients alike. She will be missed by many whose life she touched.

Memorial services will be 2 p.m. Sunday, July 22, 2012 in the Sanctuary at the Prescott United Methodist Church, 505 W. Gurley St., Prescott, Ariz. Family, friends and co-workers are invited to attend. A Celebration of Life will follow at her home. In lieu of flowers, donations can