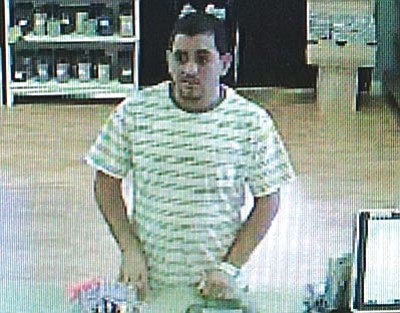 The Yavapai County Sheriff's Office is seeking the public's help in identifying a suspect in a burglary at the Spring Valley Pharmacy on Monday.

That morning, deputies answered an alarm at the pharmacy in the 17300 block of Spring Valley Road, and talked with the owner who said several prescription medications including Oxycontin had been stolen, said Dwight D'Evelyn, spokesman for the Sheriff's Office.

Investigators determined that a man forced entry into the business by cutting through roofing material and dropping into the pharmacy area to steal medications during the early morning hours.

Detectives gathered evidence through employee statements and video, and identified a suspect who had been to the store recently inquiring about specific medications.

Detectives would like to identify the person pictured in the photo above and ask that anyone with information call Detective Todd Swaim at 928-771-3260 or Yavapai Silent Witness at 1-800-932-3232.