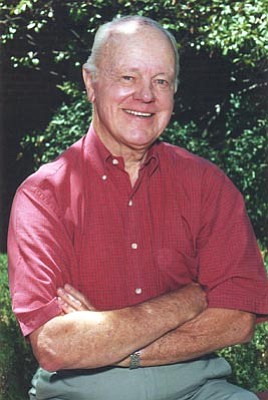 Roger Stewart, 85, died Tuesday, July 10, 2012. He is survived by his wife Jacque (with whom he just celebrated 57 years of marriage); brother John W. Stewart; daughter Elaine Harris; grandchildren Alex and Courtney Harris, all of Lincoln, Neb.; and sons David and Peter Stewart, both of San Diego. Born July 9, 1927, in Lincoln, Neb., he grew up there, graduating from the University of Nebraska in 1948. The following year he moved to southern California and after a tour in the Navy during the Korean War commenced his career in commercial banking. Upon retirement in 1992, he and Jacque moved from La Jolla, Calif., to Prescott.

During his career, Roger was involved in many community activities, but his principal interest was in health care and he served on the boards of Methodist Hospital in Arcadia, Calif., Scripps

Memorial Hospitals in La Jolla, Calif., and later, Yavapai Regional Medical Center in Prescott. A lifelong Methodist, he also was a trustee of Claremont School of Theology in Claremont, Calif.

Travel, both in business and later in retirement, was an integral part of Roger's life. He and Jacque felt fortunate to have visited over 75 countries throughout the world.

A memorial service will be Friday July 13, 2012, at 1 p.m. at Prescott United Methodist Church (PUMC), 505 W. Gurley St. In lieu of flowers, the family suggests friends may contribute to PUMC Building Fund or a charity of their choice.