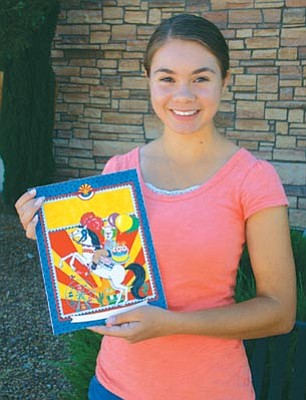 Lisa Irish/The Daily Courier<br> Shalom Eis, 16, of Dewey, shows off her drawing that will appear on the cover of the Yavapai County Fair 2012 Premium Book.

When Vanessa Martin called Shalom Eis, 16, of Dewey, to let her know she won the Yavapai County Fair 2012 Premium Book cover contest, Shalom reacted by jumping up and down, squealing with excitement.

"I was very excited and pretty surprised," said Shalom, who has entered the contest for the past six years, and also won when she was 12 years old.

Of the 167 entries from students throughout Yavapai County, the committee determined that Shalom's entry best incorporated the fair's theme and used the bright colors, clean crisp lines, and graphic elements that reproduce so well, said Martin, who is fair superintendent of school fine arts, coordinator of the fair book cover contest, and editor of the fair book.

"It's so good to see a lot of participation in the contest," said Martin, noting that the youngest cover contest winner was a fourth-grader. "We have a lot of talented kids in this county, and it's good to see them shine."

Shalom used color pencils and markers in her drawing of a rodeo clown holding a birthday cake while riding a show horse in front of a Ferris wheel and a fair outbuilding with the Arizona flag as the backdrop.

"I was excited about the theme because it is the centennial, and I thought it would be special," said Shalom, who has a website shalomsart.com where she sells greeting cards. "I've drawn since I could hold a pencil."

Shalom, who is home-schooled, said she plans to use the $150 she won from the contest to buy more colored pencils, markers, and a camera, and she's also looking forward to going to the fair with the tickets she won.

The artwork of the runners-up will also be featured in the fair book, and they received free tickets to the fair, which will run from Sept. 27 through Sept. 30 at Tim's Toyota Center in Prescott Valley, Martin said.

"We're glad the fair will be back to a four-day schedule this year, and be a true county fair" said Martin, noting that all the regular divisions will be available at the fair this year. "We'll have everything on the ground floor at Tim's Toyota Center, except the carnival rides and the animals which will be outside."

There will be several stages for performances, gymnastics and dancing demonstrations as well, Martin said. For kids, there will be a treasure hunt, a petting zoo, and calf and mutton busting.

The Yavapai County Fair 2012 Premium Book will be available at libraries, grain stores, chambers of commerce, and online at yavapaifair.com in August.