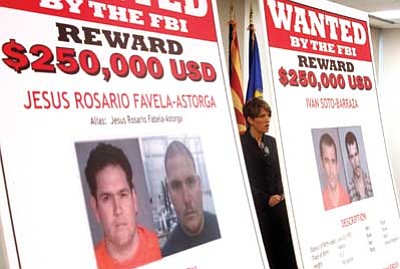 Ross D. Franklin/The Associated Press<br> Laura E. Duffy, U.S. Attorney for the Southern District of California, is flanked by wanted posters as she speaks at a news briefing where she announces the indictment of five suspects Monday, related to the death of U.S. Border Patrol agent Brian Terry.

TUCSON - Authorities made a rare disclosure Monday linked to the botched gun-smuggling investigation known as Operation Fast and Furious, revealing identities and requesting the public's help in capturing four fugitives accused in the shooting death of a U.S. Border Patrol agent 18 months ago.

The announcement comes in the wake of pressure from U.S. House Republicans who led a vote to hold Attorney General Eric Holder in contempt of Congress, criticizing the nation's top prosecutor for withholding information related to the probe.

"We believe it's in the best interest of this ongoing investigation to unseal the case at this point in time and to enlist the assistance of the general publics in both Mexico and the United States," said federal prosecutor Laura Duffy. She said the decision to release the information came independently and would not discuss the recent congressional action against Holder.

Operation Fast and Furious was launched in 2009 to catch trafficking kingpins, but federal agents lost track of most of the weapons they were trying to trace. Some of the guns purchased illegally with the government's knowledge were later found at crime scenes in Mexico and the U.S.

Critics have hammered federal authorities for allowing informants to walk away from Phoenix-area gun shops with weapons, rather than immediately arresting suspects and seizing firearms.

Since the fatal shootout near the U.S.-Mexico line in December 2010, deep flaws in the government's weapons trafficking case have come to light, and federal authorities have repeatedly declined to disclose information related to the death of Border Patrol Agent Brian Terry, such as what became of the gun used to kill him.

Operation Fast and Furious focused on an accused smuggling ring suspected of purchasing guns for the brutal Sinaloa cartel.

U.S. Bureau of Alcohol, Tobacco, Firearms and Explosives agents lost track of about 1,400 of the more than 2,000 weapons - including AK-47s and other high-powered assault rifles - which authorities believed were headed for drug cartels in Mexico.

Smuggling operations often seek out firearms in the U.S. because they have limited access to weapons in Mexico, due in part to very restrictive laws there. Border bandits have operated in the region for decades, running weapons and drugs and robbing and sexually assaulting illegal immigrants.

The release of the suspects' identities in a newly unsealed indictment Monday came with the offer of a $1 million reward for information leading to their capture.

It marked the first time all five people accused of being involved in the shooting were named by authorities.

Portillo-Meza's age and birthplace were unavailable. The other three fugitives were born in Mexico, but their hometowns were not available.

Authorities had previously released the identity of the fifth suspect, Manuel Osorio-Arellanes, of El Fuerte in the Mexican state of Sinaloa. His age was not immediately available.

All five have been charged with murder. They also face charges of assaulting four federal agents.

Manuel Osorio-Arellanes has been in custody since the night of the shooting. He has pleaded not guilty in the case.

Manuel Osorio-Arellanes was shot during the gunfight. He told investigators that he raised his weapon toward the agents during the shootout but didn't fire, the FBI said in records.

FBI agents declined to discuss which fugitive is suspected of firing the shot that killed Terry. They also would not comment on whether the weapon was linked to an Operation Fast and Furious purchase.

Much of the information in the Manuel Osorio-Arellanes case has been kept from public view after a judge sealed records in spring 2011. Six news organizations, including The AP, asked for the documents to be uncovered, and earlier this year prosecutors agreed.

However, the information released has revealed little about the circumstances of Terry's death.

The unsealed indictment says the five men, plus another who faces lesser charges in the case, came to the U.S. from Mexico in order to rob marijuana smugglers.

The other suspect, Rito Osorio-Arellanes, was in custody before the shootout. He does not face murder charges.

The disclosures are among the few details released by authorities despite repeated requests from congressional leaders and news organizations, including The Associated Press. The FBI, ATF, and U.S. Customs and Border Protection have all denied Freedom of Information Act requests that seek reports and other documents in the investigation of the shooting.

FBI Special Agent James Turgal said in announcing the reward that "we stand in support of the Terry family and our partners in Border Patrol."

Patrick McGroder, an attorney for the Terry family, said in a statement that Monday's information shows that the prosecution is moving forward, but efforts to hold federal officials accountable for the flawed investigation remain stalled.

McGroder says Holder's office should release the documents sought by members of Congress.

Agent Terry "and his family rightly deserve a full and thorough explanation of how Operation Fast and Furious came to be," McGroder said.

The information released Monday was the first update in the case since the contempt vote against Holder in June.

Also, it was the first public development in the case since April when a straw buyer who purchased two rifles found at the scene of the shootout pleaded guilty to firearms charges. Jaime Avila faces up to 10 years in prison when he is sentenced in September.

So far, 11 people in what the government says was a 20-member smuggling ring have pleaded guilty to various charges.

Terry, a former Marine and Michigan police officer, was part of an elite squad similar to a police SWAT team that was sent to the remote areas north of Nogales known for border crime, drug smuggling and violence.