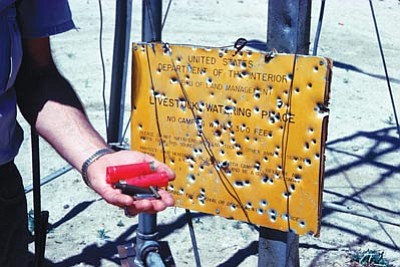 BLM/Courtesy photo<br>Vandals shot up this sign on Bureau of Land Management property in California.

WASHINGTON - Target shooters on Arizona public lands are being asked to hold their fire in the current dry weather because of fears they could spark wildfires.

Officials restricted the use of firearms on some public lands in Arizona after gunfire was blamed for igniting several fires in Arizona and other Western states. While hunting is still allowed, target shooting has been banned in recent weeks on many public lands in the state.

The restrictions have gun-rights advocates complaining that wildfires are being used as an excuse to "get shooters out of the forest."

"This is a golden opportunity for people who are anti-Second Amendment to try and blame shooters for everything," said Noble Hathaway, president of the Arizona State Rifle and Pistol Association.

But government officials call the restrictions a common-sense approach, and said they will be lifted as soon as conditions permit.

"We had so little winter moisture in Arizona that we are just in extremely dry conditions," said Carrie Templin, a spokeswoman at the Arizona office for the Bureau of Land Management. "It doesn't take much to start a fire."

BLM has issued an out-

right ban on discharging firearms in the Hassayampa and Lower Sonoran areas, although licensed hunters are exempt from the ban. The bureau has banned the use of tracer ammunition and explosives in its Kingman, Lake Havasu, Yuma, Safford and Tucson districts.

Most national forests in the state - Coconino, Prescott, Coronado, Tonto and Kaibab - have banned the discharge of firearms except while "engaged in a lawful hunt." The Apache-Sitgreaves National Forest still allows target shooting, but has banned black-powder guns.

Templin said that because of this year's extreme conditions, "anything that can cause a spark" has been prohibited. In addition to target shooting, the BLM has banned fireworks, welding equipment and campfires on its lands.

"With different conditions it wouldn't be an issue," Templin said.

National forests throughout the state have also linked firearms to wildfires this year.

Tonto National Forest officials said in a news release that recreational shooting is of "particular concern" for them. A Mesa man was charged this week with sparking the Sunflower Fire while target shooting with an incendiary shotgun shell in May. That fire had burned about 17,500 acres

and cost $6 million as of Monday, officials said.

"What we're seeing is an increase in fires started by target shooting, especially in Western states," said Paige Rockett, a spokeswoman for Tonto National Forest.

Hathaway agreed it is important to take "precautions and be extremely responsible out there." But he said that government agencies tend to take "advantage of a few unfortunate incidents" and infringe on people's Second Amendment rights in the process.

"I don't like knee-jerk reactions to anything," Hathaway said of the decision to limit shooting in response to the wildfires.

But Templin said that BLM merely wants to limit the number of fires caused by humans this year.

"These are temporary restrictions because of the conditions," she said. "As soon as weather conditions change, they will go away."