Every song's a hit in Kaci Bays' 'Classic Country Jukebox' 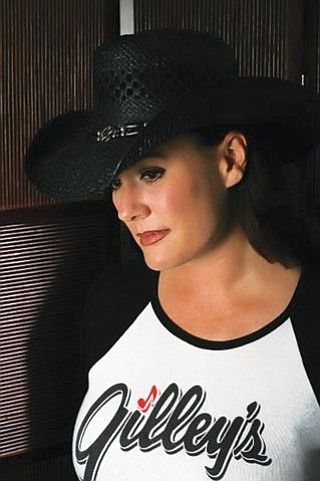 Classic country vocalist Kaci Bays, who polished her artistry with Mickey Gilley in Branson, Mo., brings some of the best of the genre to the Elks Opera House stage on Tuesday, July 10.

Curtain time for Lonely Street Production's "Classic Country Jukebox," also starring Robert Shaw, is at 7 p.m. Tickets are $22 for seniors 65 and older and $25 for people under 65. For tickets call the opera house box office at 777-1370 or visit www.elksoperahouse.com.

Bays was born in Kansas City, Mo., and lived for a time in Scottsdale before heading to Branson when she was 19 or 20 years old. She now lives in Tucson so that she can be near family.

"I've always been in the entertainment industry," she said, performing with her two sisters in contests, dinner theaters, and oprys. She went to Branson on her own, though, and entered a contest but didn't place. Eventually, Lady Luck came to her side. She heard that Gilley's backup singer was leaving and that hundreds of audition tapes and CDs poured in from hopefuls for the job. But, Bays said she knew the theater manager who "put my name at the top of the pile." Gilley hired her.

"I feel very fortunate to have landed that job," Bays said. "It was a great experience for me," and one that lasted 16 years, singing backup for Gilley, doing solos and duets with him in his Bronson theater and touring different places in the off-season when Gilley and his troupe took to the road.

Bays describes her alto voice as "pretty low," but when she belts out the standards she said she "tries to emulate the artist I'm performing as much as I can. People want to hear it the way they remember it."

For the show in Prescott, a lot of old standards from classic country days are on the bill - a Patsy Cline medley, a Loretta Lynn medley and selections made famous by Dolly Parton, Johnny Cash and June Carter Cash, Anne Murray, Tammy Wynette and more. Shaw will highlight male influences in classic country.

Bay and Gilley stay in touch, even though she has left Bronson. "He was like a second dad to me," she said, noting her young age when she joined his show. "He's a wonderful man, very laid back and just really treated everybody like family.

"It helped me improve. I was so green when I started that through the years, I improved with the experience."

Fate stepped in again when she became part of Lonely Street Productions, which Shaw owns. She knew she wanted to keep singing when she moved to Tucson, she said, so she found the Tucson-based company on Craigslist in her search for a band. In short order, she signed on with Shaw and his company.

Of her classic country genre, Bays said, "I think the main thing is that it is the friendliest genre of music to me. All the artists are welcoming, and the songs relate to everyday experiences of everybody - the stories that country songs tell. I like the sound and the relationships. This style fits my voice the best."