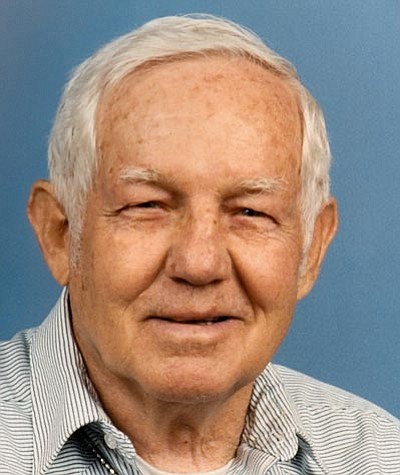 William J. Murray went home to be with his Lord after a difficult, but mercifully brief, battle with pneumonia. Determined to the end, Bill fought longer than his doctor thought possible. He ended his fight with four generations of the family that idolized him by his side.

Bill was born on April 5, 1924, in Coffeeville, Kan., to William and Daisy Murray, and was reunited with Dot, his beloved wife of 64 years, on the afternoon of June 28, 2012, in Prescott, Ariz. Bill's unwavering devotion to Dot for the next 64 years of marriage, and then even after she passed away, was inspiring to those who saw it.

Bill was a true patriot. As a WWII veteran, he received an Asiatic Pacific campaign medal, a Philippine Liberation Ribbon with a Bronze Star, a Good Conduct medal, a Bronze Service Arrowhead, and a WWII Victory medal. During his service in the United States Army, he met Art King, the man who introduced him to the love of his life - and then became his brother-in-law. Bill raced stock cars and loved to recount stories about it. He was proud to have been a long time member of the Smoki People. He worked in many places as a mechanic, including the City Of Prescott and the Arizona Game and Fish Department. There was nothing he couldn't fix! After retiring, he just enjoyed spending time with family, teaching his grandkids to drive and working on their cars. He taught them a lot - he and one grandson restored a 1959 Ford truck, which was the boy's first truck. He taught his granddaughter how to rebuild a transmission when she was only 16. When he became a great-grandpa, he and great-grandma were enamored. They even volunteered to be "daycare"! He impacted his family's lives immeasurably. He was proud to have one of his great-grandsons follow in his footsteps when he leaves in two months to begin his service in the U.S. Army. Bill was so proud of all his family - as they were of him. It seemed he knew everything. "Ask grandpa" was a standard response to many questions family members had. He always had an answer. There was nothing he wouldn't do for his family. He was an amazing man whose twinkling blue eyes, quick grin, silly sayings, wisdom, and boundless love will be missed sorely. Tap 'er light, grandpa. If Bill were here, we think he'd say "I'm sure proud you got to see me. But don't cry for me. I'm fine as frog's hair. In fact, if I were any better, I'd be suspicious. So don't take any wooden nickels, tap 'er light, and I'll check you later."

Visitation will be 10 a.m. Tuesday, July 3, 2012, at Arizona Ruffner Wakelin Funeral Home, corner of Cortez and Carleton followed by a Celebration of Bills Life at 11 a.m. Burial will be at Mountain View Cemetery at 12:30 p.m.