Cowpunchers' bronc riding not for faint of heart 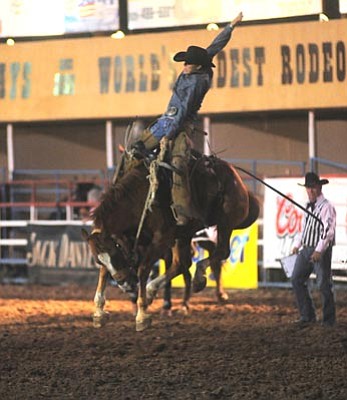 PRESCOTT - Cousins Huckleberry Sandsness and James Fancher got their start in the rough-and-tumble world of Cowpunchers Bronc Riding as teenagers growing up on ranches in Kingman.

Now ages 22 and 24, respectively, the seemingly mild-mannered young men were among a group of seven contestants entered in the first of three performances in their special event Sunday night at the 2012 Prescott Frontier Days Rodeo.

Although cowpunchers bronc riders don't carry the clout of the saddle bronc athletes on the pro rodeo tour, they're putting their health and safety on the line every bit as much as the big boys.

To earn a score from the judges, just like the pros, a cowpunchers contestant must ride the bucking horse that he drew for 8 seconds.

The difference for the cowpunchers is that they ride on their own ranch saddles. And they must keep both of their feet in the stirrups attached to those saddles for the entire duration of their turns in order for them to count.

With seven of the 21 total entries going Sunday, all of them failed to score. The contestants either fell off their horses before the 8 seconds expired or lost a stirrup.

Round 2 of the competition will take place shortly after 7:30 p.m. today during the Frontier Days Rodeo's sixth performance.

The final round is slated for the seventh performance Tuesday evening, at which time the winner will be determined.