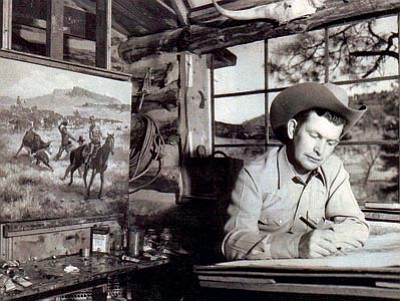 Photo courtesy of the Phippen Museum <br> George Phippen works in his studio in this 1950s photo.

Born in 1915, George Phippen was raised on farms in Iowa and Kansas and had no formal art education. As a youngster he modeled clay figures of animals, eventually working his way up to lifelike images of the ranch hands and cowboys who came through on the Chisholm Trail cattle drives. While serving in World War II, he taught himself to paint and, soon after the war, he briefly worked with artist Henry Balink in Santa Fe, N. M. As he began to work in oil and watercolor, art became his life.

In 1949, George and his wife, Louise, settled in Prescott where he built his first official studio, rapidly establishing his reputation as a Western artist. He researched the background, elements, people, settings and historically accurate gear to portray his subjects with as much authentic detail as possible. In time, the family relocated to Skull Valley where he established the Bear Paw Foundry and, in the 1950s, George and friends Joe Noggle and Joe Vest revived the nearly forgotten process of lost-wax casting of fine art sculpture - especially Western art.

Although George had a brief career (only 20 years), he produced approximately 3,000 works and is best remembered for his bronze sculptures including amazing pieces like "Cowboy in a Storm." He was one of the original founders and first president of the Cowboy Artists of America.

When he died in 1966 at the age of 50, his work ethic and inspirational character encouraged a group of friends, family and artists to pursue the creation of a facility that would specifically represent artists from the American West. The George Phippen Memorial Foundation was formed in 1974 and the first annual Memorial Day Show and Sale was presented featuring some of the finest Western sculptors and painters from across the nation. In the early 1980s, the James Family Trust donated a parcel of land to the foundation for the construction of the Phippen Museum, which opened its doors to the public for the first time on Oct. 13, 1984.

A recent expansion project at the museum in 2011 has seen the addition of 5,000 square feet of gallery space, with another 6,000 square feet for a research library and multipurpose classroom to be completed in the near future. The new gallery space is home to the Kemper and Ethel Marley Western Art Gallery and includes a Western heritage area featuring artifacts, a working chuck wagon and the Arizona Rancher and Cowboy Hall of Fame. This permanent exhibit contains biographical information, photographs and memorabilia highlighting Arizona's notable ranchers, rodeo and working cowboys. New inductees are added each year at the museum's annual Fall Gathering barbeque.

Today, the Phippen Museum's permanent collection consists of numerous paintings, etchings, drawings, bronze sculptures, photographs, artifacts and jewelry that date from the late 19th to the early 21st century. On display are numerous selections from this collection, including some of Phippen's works. Presentations and rotating exhibits are offered throughout the year as well as educational programs that enlighten and entertain school children, special interest groups and visitors.

The museum is also especially proud to be the new home of the Prescott Area Art Trust's Solon H. Borglum collection. This special exhibit features 17 of Solon's bronze sculptures, several pieces of furniture from his Stamford, Conn., home as well as a painting and other items. In 1898, he was named the "Sculptor of the Prairie" for his realistic sculptures of Indians, cowboys and horses, all subjects from his days as a working cowboy on his father's ranch in the Wild West. He is the sculptor of the Rough Rider statue on the courthouse plaza and the "Cowboy at Rest" bronze, also on the plaza.

The museum's major annual fundraiser continues to be the much-anticipated Western Art Show and Sale on Memorial Day weekend. Presented on the courthouse plaza in Prescott, this special event draws artists and visitors from far and wide and features Quick Draw competitions, Denim to Diamonds Gala, the Miniature Masterpiece Show and Sale and much, much more.

So saddle up for a Western adventure and come experience the Phippen Museum. It is located on Route 89 just north of Granite Dells. Docents conduct tours on the first Saturday of every month at 11 a.m. The museum is open Tuesday through Saturday from 10 a.m. to 4 p.m. and Sunday 1 to 4 p.m. Admission is $7 adults; $6 AAA members, $5 students with ID, under 12 and museum members are free.