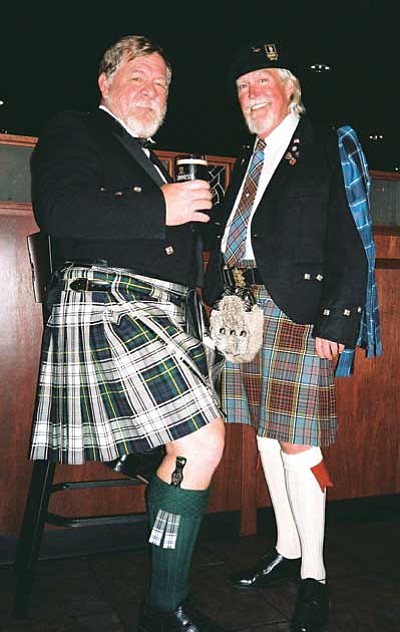 Mere mortals will celebrate the immortal Saturday evening when they gather at Celtic Crossings Pub to honor Robert Burns, the bard of Scotland, along with the "whole world."

"We always have a great turnout of people with kilts and bagpipes," said Maggie Lamper, who with her husband Larry, owns the pub at Prescott Gateway Mall. The Lampers joined the 200-year-old Robert Burns supper tradition when they opened Celtic Crossings on Feb. 11 five years ago.

The suppers, which customarily take place around the famous poet's birthday on Jan. 25, began at the end of the 18th century when friends in Ayrshire, Scotland, decided to honor Burns a few years after his death in 1796.

Burns' tutor, John Murdoch, would likely take part in a celebration of Burns out of disbelief, because one historian said he found him of "dull ear" when he tried to teach him church music and would hardly have thought that his young student would ever "court the muses."

But, Burns did, indeed, have a muse sitting on his shoulder. His father was a poor tenant farmer, and he spent much of his young life working his father's farm. In spite of that, Burns became a passionate reader and wrote his first poem when he was 15 years old.

Eventually, the poet's pen won over the farmer's plow, and the "ploughman poet" became almost an instant celebrity and today is revered as the national poet of Scotland.

With David McNabb as master of ceremonies, the evening begins at 6 p.m., though Maggie Lamper advises getting to the pub at 5:30 p.m., with pomp and, yes, haggis.

Led by a bagpiper, the haggis, right out of the oven, will arrive on a big tray, amid recital of Burns' famous "Address to a Haggis" that ends with famous lines "But, if ye wish her grateful prayer, gie her a Haggis!"

The haggis that Celtic Crossings will serve Saturday will be a tasty beef product made in the United States and not the customary "innards" of a sheep or calf, Maggie said, and McNabb said he will hand out English translations of the very difficult-to-understand Scottish dialect in Burns' verses.

The tribute to Burns will continue with a toast to his "immortal memory" of Burns, before the Scottish Highland Dancers, who will be here again in May for the annual Highland Games, entertain the crowd with their fancy footwork.

The evening's fare also includes the Kilted Spirits, who will sing Scottish, Irish and Celtic songs, along with Burns' poems that have been put to music. And, McNabb, in authentic brogue, will recite some Burns' poetry before he asks people in the audience to come forward to read their favorites.

Maggie is passionate about Burns' music, and looks forward to an evening of hearing it. She is of Mexican descent and Larry has Scot/Irish roots, and as proprietors of a Celtic pub, Maggie feels it is their duty to put on a Burns supper.

"You have to do it," she said. "If you're going to own a Celtic restaurant, you just have to."

255th birthday of Robbie Burns honored by The Scots of Prescott
Who is Robert Burns and why does he have a day?
Scottish singer hits Prescott
Friday event will benefit 10th annual Highland Games
Get your bagpipes, kilts and fiddles ready for Watson Lake Park
Event Calendar