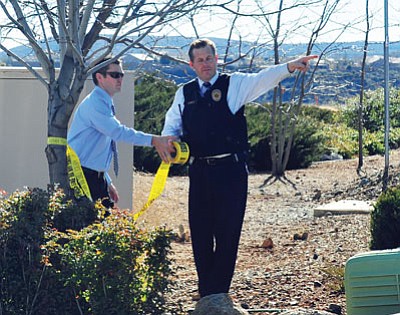 Police here have identified the victim of a shooting inside the Stepping Stones Agencies' building Wednesday morning as Edward Mitchell, 49, of Prescott Valley.

Paramedics pronounced Mitchell dead at the scene after police responded to a 10:33 a.m. call of an accidental shooting at Stepping Stones at 6719 E. 2nd St. Mitchell had been shot in the head.

Police investigators recovered a small-caliber handgun that they believe was involved in the death, Administrative Sgt. Brandon Bonney reported.

After the incident, police detained a man who was walking away from the scene, Bonney said. They questioned him but released him hours later without charging him.

"That is all up in the air at this point" whether the man will face charges, Bonney said Wednesday afternoon. "We have no indication of a targeted attack."

Bonney said the man, Mitchell and another man were inside a suite that appeared to be under renovation or construction at the time of the shooting.

Bonney provided no additional details about the shooting.

Police responded at 10:33 a.m. Wednesday to a report about a man accidentally shooting another man in the head, Administrative Sgt. Brandon Bonney said. The initial report claimed the man dropped the gun first.

Bonney said the victim was pronounced dead at the scene. He was unable to provide information whether the victim worked at Stepping Stones and what the connection of the other man is to Stepping Stones, a nonprofit that provides social services.

Police detained the man for further questioning, Bonney said. He described the man as being in his 40s or early 50s.

Check back to PVtrib.com for details on this developing story.