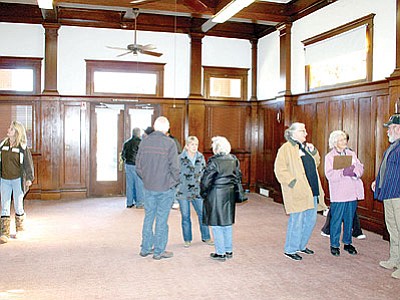 A packed town hall left about 20-30 audience members in the cold Jan. 17 as they spilled onto the boardwalk outside the Dewey-Humboldt town council chambers. They were there to hear a presentation by David Nystrom on why the town should purchase the former Gateway Baptist Church building on Main Street, Humboldt, for a historical museum.

Earlier in the day, the council and interested community members toured the 3,168-sq.-ft. structure built in 1918 that the D-H Historical Society is proposing for a museum site. While there's no official layout yet of the space, Nystrom said the main room with its hardwood floors and door-less vault would make a great exhibit room. A spacious downstairs area with access to the outside could become offices with extra room for archives and storage. He estimated about 50-60 people came through the building Tuesday morning.

The proposed museum was on the agenda as a presentation only by Nystrom, D-HHS treasurer, with no official action requested.

"This is our historical heritage that we are proud of and want to show off," Nystrom told the council, many of whom had questions and concerns, and who also expressed an appreciation for town residents that turned out in support of the project.

The council established a subcommittee at its Dec. 20 meeting and has met once on Jan. 10 when Nystrom and D-HHS president Kevin Leonard presented the proposal to subcommittee members Vice-Mayor Mark McBrady, and Councilwomen Nancy Wright and Denise Rogers.

Several members in the audience commented at the Jan. 17 council meeting, including Lydia Chapman who made a pun on the town's name asking, "Do-we or don't-we?"

Former mayor Earl Goodwin is a member of the D-HHS and said the group has traveled to Camp Verde, Crown King, Bullhead City and Wickenburg, and all have active, busy museums filled with artifacts and volunteers.

"Each community has a wealth of history in its attics," Goodwin said. "As soon as there's a building, many items came rolling in. It made the museum an important part of the community."

Not all expressed an urgent desire to move toward the town's purchase or lease of the former bank building. Resident Jack Hamilton said the presentation and support shows a commitment from the community, but he thought the council could explore other alternatives. He expressed concern about a possible need to bring the building up to code, the transfer of money to a non-existent line item in the town budget, and bypassing the Capital Improvement Program process.

"However, the town council is not bound by the CIP and there is no legal requirement that projects are first ranked by the CIP process before being funded or approved," he wrote Monday in an e-mail.

"The opportunity for the museum was not apparent in mid-2011 when the current fiscal budget was formulated and approved. Therefore, there is no 'line item' for the town to fund the request for the museum," he said, adding that budget includes $1.7 million in uncommitted, unallocated funds after considering revenues and expenditures.

"If it is necessary to fund this as a specific 'line item' in the budget, council has the ability to amend the current budget to create a new line item to fund a museum. Our proposal included this suggestion," Nystrom wrote.

Town Attorney Phyllis Smiley was present to answer questions, one concerning a possible conflict of interest of two council members who own businesses on Main Street. Smiley said the two, McBrady and Rogers, as members of a group of business owners numbering more than 10, would probably not have a conflict.

"I own property on Main Street. I have nothing to do with the museum. I would argue that I don't meet the criteria to recuse myself," said McBrady, who also chairs the museum subcommittee.

Nystrom said the Gateway Baptist Church congregation outgrew the building on Main Street and constructed a larger building along Highway 69. It plans to list the former bank on March 1 for $160,000.

Repan said he wanted to see the most recent appraisal, commenting that the council has a duty to get the best value for the town's dollar. He said he understood that the church bought the building 10 years ago for $60,000.

Smiley said the proposal discussed at Tuesday's council meeting was not what she understood it to be on Monday, when she learned the Historical Society was requesting $300,000 for the purchase.

"Now I hear it's $160,000 for the building and $140,000 to gift to the Historical Society," she said. She also wants to look at other issues raised during the meeting before answering council's questions about the use of public funds. She recommended the council meet in a future executive session to discuss possible purchase or lease negotiations.

D-H resident Mr. Dietrich, who shares a Dewey zip code at his home in the Prescott Country Club, joined the Historical Society in March. He told the council that the recent Tostito Bowl in Tempe had a list of the five top things for tourists to see in the Phoenix area before they left town.

"The top two were museums - the Heard Museum and the Musical Instrument Museum," he said. "We can get something to get our name on the map."

The Historical Society is putting together a Citizens Petition for Immediate Support of a Community Museum urging the council to take action. Members hope to collect 2,000 signatures in the next few weeks. For more information about the D-H Historical Society, call Kevin Leonard at 632-8812 or David Nystrom at 742-6304.