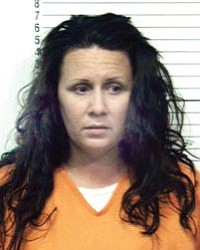 PRESCOTT - A woman arrested for multiple burglaries last June took a plea deal on Wednesday that could see her serve 17.5 years plus probation.

Chino Valley police arrested Brown on June 3 on charges of burglary after a resident of a home on Jackrabbit Trail found Brown inside her home, D'Evelyn said.

"She was checking for unlocked doors and stealing items from homes," D'Evelyn said. "If she saw a person working in their yard, she'd wait until they were out of sight, then slip in the house to steal a purse."

Detectives recovered a number of stolen items including a laptop, several ID cards, cash, a firearm and a large amount of jewelry, including a ring appraised at $20,000 by a jeweler in Prescott, D'Evelyn said.

She pleaded guilty instead to two counts of second-degree burglary, one count of aggravated identity theft, one count of possession of methamphetamine paraphernalia, and a single count of trafficking in stolen property.

Brown could be sentenced to up to 8.75 years in each of the burglary charges, but the plea agreement stipulates probation on the remaining charges.

Brown will appear for sentencing in February before Judge Celé Hancock.