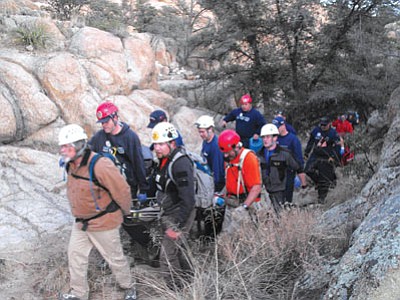 Scott Orr/The Daily Courier<br>Rescuers carry out the body of a man who fell 15 feet into a ravine Wednesday afternoon.

PRESCOTT - A man climbing the rocks at the Granite Dells along Highway 89 fell about 15 feet into a ravine and was killed Tuesday afternoon, said a Prescott Fire Department spokesman.

The victim was a 27-year-old Prescott College student who was climbing with several friends when he fell and sustained a serious head injury. He was unconscious when rescuers arrived at the scene at about 4:30 p.m., and never regained consciousness, said Division Chief Eric Kriwer, spokesman for Prescott Fire.

Prescott Fire called for help from the Yavapai County Sheriff's Search and Rescue Team to work their way into the rugged canyon.

It took about 90 minutes for the 15 rescuers to bring the man out of the ravine. Rescue workers used ropes to rappel into the area.

A Native American Air medical helicopter stood by about a half-mile north of the scene, but it was released once the man was brought out.

He was pronounced dead at the scene.

The man's name has not been released.